Splitboarder Takes Walkie Talkies Along in the Backcountry

Backcountry skiing and snowboarding is underway across North America.

Midland Radio spoke with Larry Banks, a splitboarder about how walkie talkies are vital to his safety as he explores remote areas.

Larry Banks currently lives in Liberty Lake, Washington where he works as an Asset Protection Manager.

He moved to the area after getting into the backcountry and splitboarding scene over 10 years ago.

"I moved out here in 1998 to be closer to snow and fewer people. I just started doing a little bit more splitboarding because there was easier access to backcountry spots."

The backcountry is comprised of any land outside of the ropes at resorts. It's land that isn't mitigated by ski patrol or avalanche control.

Banks began splitboarding 10 years ago when a friend introduced him to the sport.

Splitboarding is a snowboard that can be separated into two ski-like parts. The ski-like parts are put in "tour mode" when climbing to ascend slopes.

"I just went out and bought a used board and kind of just started doing local things to learn more about it," Banks said. 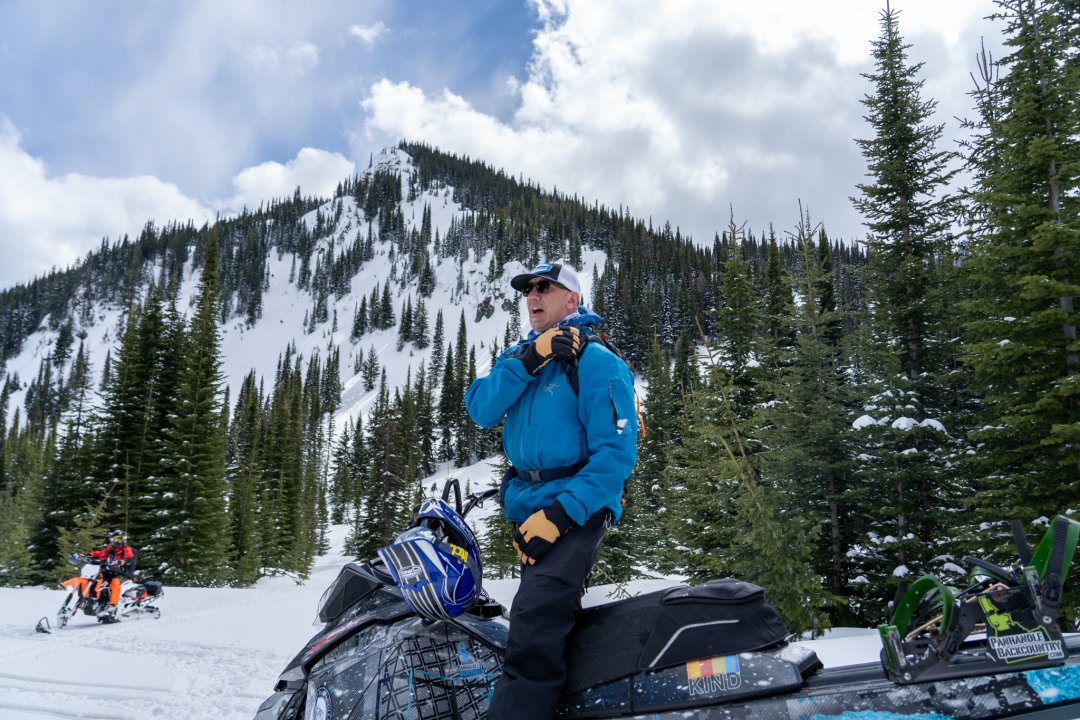 PART OF THE BACKCOUNTRY COMMUNITY

Banks works with the Idaho Panhandle Avalanche Center to help others learn about safely navigating the backcountry.

“I just needed to be giving back to the community and got into doing more with that. I also just upped my skillset with classes that I took and then started teaching avalanche courses," Banks said.

He also started a website with one of his splitboarding friends. There, others can find helpful tips and articles.

"I was writing articles for local publications about backcountry splitboarding and then got into doing more work with the avalanche center after a buddy of mine was in a pretty severe avalanche.”

Because of the risks that come with exploring the backcountry, Banks said it is important others know how to handle any dangerous situation and are aware of issues others have encountered.

"Over the last few years with the number of avalanche fatalities, people want to learn. I think it’s good when media puts those out there in a respectful and knowledgeable way for the community to see because it then encourages people to get education before going out and doing this.”

Banks said along the Idaho Panhandle, splitboarding season typically begins in December and runs through mid-May. However, he said the optimal conditions are in February through March.

“You can actually make year-round turns. I’ve made turns into August before," he said.

While Banks has a full-time job, his love for the backcountry has continued to grow over the years.

“A big part of what I love is the quietness and just being out where you don’t have other people essentially. It’s cathartic to climb and reach a destination that maybe you and a handful of other people get to experience," he said.

He often goes out and explores the area with his website partner. Throughout the years, they have found little holes that no one else has boarded.

Part of why he loves splitboarding is getting to experience these unchartered areas with important people in his life.

“I get to do this with my friends which is just so fun. Even if it’s somebody that is new to the sport, having them experience it is super special because at the end of the day everybody just has huge smiles on their faces. There’s just such a positive vibe from doing that.”

His favorite area to splitboard is in his backyard of North Idaho. However, he also enjoys Revelstoke in the southeastern British Columbia of Canada.

“There is just supreme skiing and backcountry riding there.”

THE PANDEMIC'S IMPACT ON BACKCOUNTRY

Throughout the pandemic, Banks has only seen more people take up backcountry activities as a way to get out and about.

"There aren't restrictions in the backcountry like there are at the resorts. People have just wanted to get out and do something fun."

Banks said it is important that newcomers get the proper education before hitting the backcountry.

As more people move to areas with backcountry exploring, Banks has been encouraged by the number of people who have made education a priority.

“These areas are growing so we’re getting a lot of people that want to get the necessary education about the backcountry," he said.

USING WALKIE TALKIES IN THE BACKCOUNTRY

The most prominent use of the walkie talkies are to ensure safety of everyone out in the backcountry.

“Just this weekend we were out and ran into a couple of our website members and their friends. The friend didn’t have the same skillset as us so it was really imperative to be able to be able to have that conversation with him about where we were moving and making sure he was okay.”

Out in the backcountry, wind can make it difficult for Banks to communicate with others nearby without walkie talkies.

“With the high winds you can be 15 to 20 feet away from somebody and you can’t hear what you’re saying because the winds will be so loud. Having radios are imperative to be able to have that communication," he said.

Banks often heads down the slope before others so he uses the walkie talkies to share with others what he encounters.

“If I drop a line and I’m with other people, I’m able to let others know where they should go or don’t go this way if there are a lot of rocks showing. I also always make sure I take two radios with me when I go so that anyone I’m with, I can hand a radio to them.”

Midland's walkie talkies have been durable and reliable on all his trips to the backcountry.

“I love these radios. I’ve used other radios that are out there and I’ve just found that Midland is far more superior. There are a lot more features that you can use.”

Others that he splitboards with are also fans of Midland's walkie talkies.

“There are sometimes when people have another radio brand and they will actually take mine over theirs because of the easy use.”

Banks said he keeps his T290 strapped to the shoulder strap on his backpack. He said Midland's walkie talkies have a lot of helpful features that are easy to use and understand.