To mark the day, we spoke to one of our influencers, Andy Dole, about how technology like two-way radios has transformed farming over the last decade.

ABOUT ANDY DOLE AND DOLE FARMS

Andy Dole is a sixth generation farmer in Mattoon, IL.

He runs a farm with his dad, uncles, and sister where they grow cash crops like corn and soybeans.

This is his fourth season as a full-time member of the farm.

"It's my fourth season, but I've been working on the farm my entire life."

While he grew up on the farm, Dole wasn't always sure he wanted to make farming his profession.

“When I was younger I helped on the farm a lot and as I got into my teenage years, I got more distracted with sports, school, and friends. I didn’t really have my mind determined on what I was going to do."

Dole went to the University of Illinois to study Crop Science. Even then, Dole wasn't sure farming was for him.

“My dad was always really adamant that I could always do what I wanted to do."

In the end though, he couldn't pass up the opportunity to work in the family business.

“As one of the three heirs to the farm, I thought it was wise not to pass on the opportunity given the nature of farming. I thought about how difficult it is for someone who isn’t granted the same opportunity to take on a farming operation. It was something I couldn’t pass up on.”

For him, working with his loved ones is something he cherishes.

“My favorite part of farming is getting to spend time with my family everyday. Sometimes it can get old quickly, but I’m grateful in the overall scheme of things that I get to work with my dad, sister, and my uncles. They say don’t mix business and family, but farming is the opposite business model.”

Corn and soybean harvest season begins in mid-September and runs through the end of October for Dole's family.

As a family run operation, preparation for harvest is key.

“Preparing for harvest season- you want to make sure your equipment is ready and that everyone is rested up. You just want to try to keep a positive attitude going into it because emotions tend to run high.” 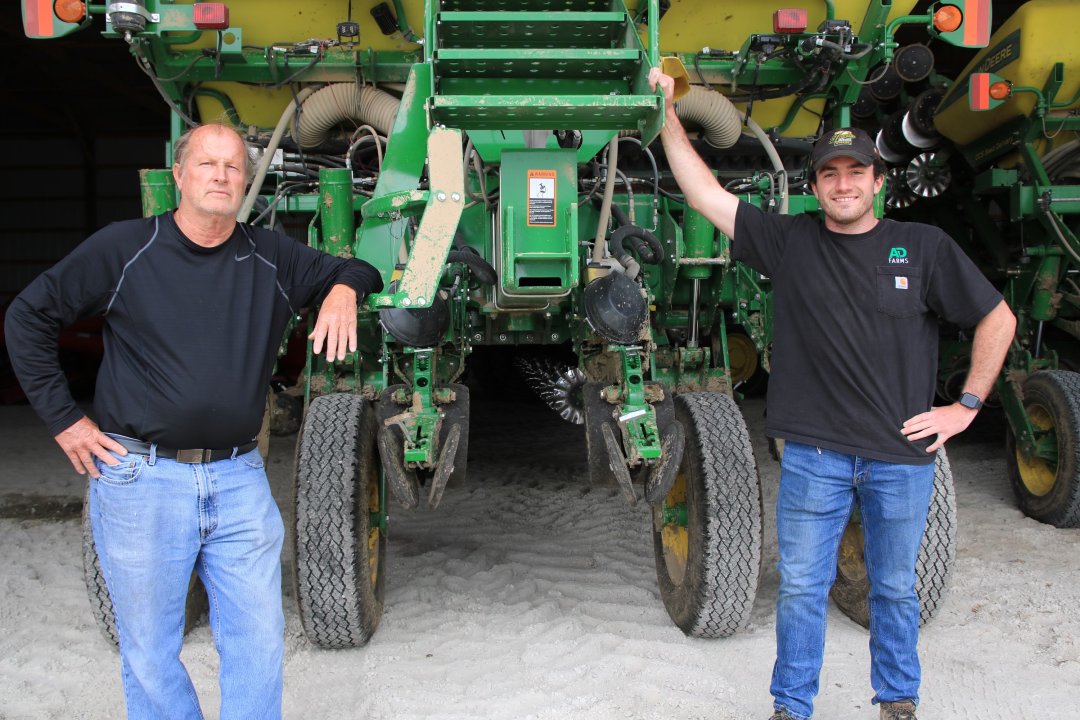 The U.S. Department of Agriculture says technological developments in agriculture have led to changes in the farm sector.

"I always say how amazed my late grandpa would have been who passed away about 15 years ago. He would have loved to see what we do now vs what we did in 2004 which was his last season.”

He's seen just how much yields have progressed with the use of technology in equipment.

“Newer machines, tractors, combines they all run on very sophisticated computers. They can be challenging to maneuver, but when they work, they work extremely well.”

Dole says his best attribute to his family's farm is his technological understanding.

“Technology has made its way into all aspects of farming from planters to tillage equipment. A lot of them rely on technology and computerized sensors. From the cab to have microscopic precision on all the tasks we do is unparalleled."

That's led to more efficiency on the farm.

“It allows us to be a lot more efficient with our usage. Autosteer has been around for almost two decades, but the things you can do with it now have become much more user-friendly and adaptable to different tasks.”

Part of technological advances on the Dole farm have been the use of two-way radios.

Dole Farms knows just how important communication is to ensuring the safety of everyone on the farm.

"Radios have the safety aspect. We talk everyday on the farm and throughout social media about how important it is to be safe around the farm. Communication is pivotal to safety. It helps to have radios as a grain cart driver, combine operator, or just someone in the field with a two-way radio to know where people are."

Two-way radios have also vastly improved efficiency on the farm.

“The amount of energy and stress that is no longer required because you can easily communicate with your fellow operators. Using two-way radios has made my life so much easier in the grain cart being able to quickly communicate.”

“Cell phones are great, but they are not efficient. It’s very easy to miss a cell phone call and it’s hard to hold up a phone and listen all the time.”

Dole heard about Midland Radio through social media. He knows he can count. on Midland products to get the job done.

"Midland products come in at a good price point, they do a good job, and they’re reliable.”

His favorite Midland product is the MXT400 MicroMobile Two-Way Radio.

"I love all the products, but this is by far my favorite. We all love the power and range."

FARMS IN THE UNITED STATES

According to the U.S. Department of Agriculture, the number of U.S. farms peaked at 6.8 million in 1935. The numbers of farms in the United States rapidly fell until the early 1970's. However, since then the number of farms has declined at a much slower rate. 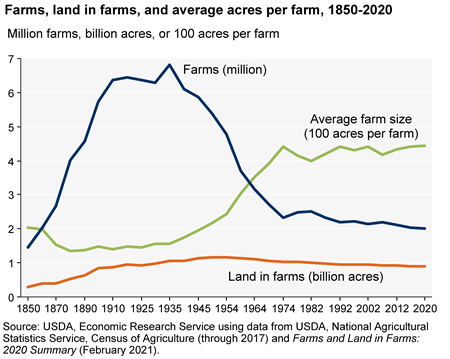 Gross cash farm income (GCFI) is the annual income before expenses and includes cash receipts, farm-related income, and Government farm program payments. The GCFI is forecast at $486 billion in 2021. That's an increase of $347 billion in 2001. If the GCFI predication is correct, it would have increased 7.3% since 2020. 2021's GCFI would be the highest since 2014. 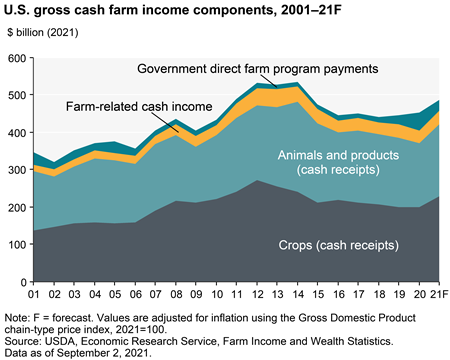 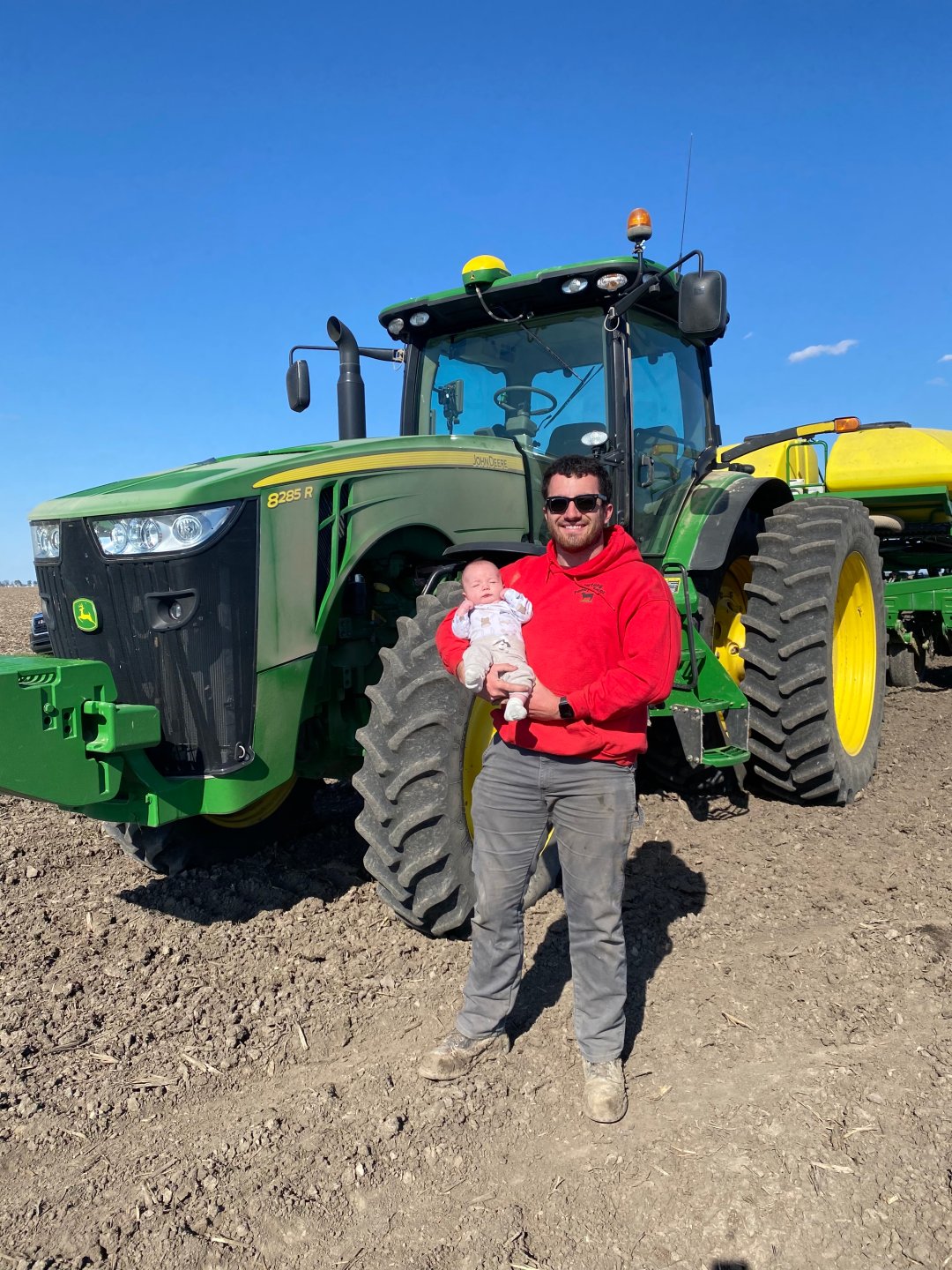