To mark the day, we spoke to one of our influencers about the benefits of vans and how handheld radios play a role in embarking on each adventure.

Brian Lau is based out of Orange County, California. While he's been working in the financial industry for the last 13 years, the outdoors have always been part of who he is.

“I grew up scouting. I am an Eagle Scout. I had been involved in Boy Scouts since first grade.”

Lau has two children and knew he wanted to instill his own enjoyment of the outdoors in them.

"I know my parents really instilled that outdoorsy, adventure, exploring life. I wanted to pass that down to my kids and have that experience for them. I think it’s good for them in this day and age of technology," Lau said.

While in college Lau put the outdoors on the back burner to focus on his studies. However, three years ago he bought his Sprinter Van. He's taken his van to the next level and outfitting it for overlanding.

“I had not considered a van as a typical rig. It’s not your typical rig for camping for off-roading, but through my research I was convinced the Sprinter was capable of doing a lot of these off-roading things," he said.

He wanted others to share in his experience so with help from two partners, they founded Sprinter Overland Trip. 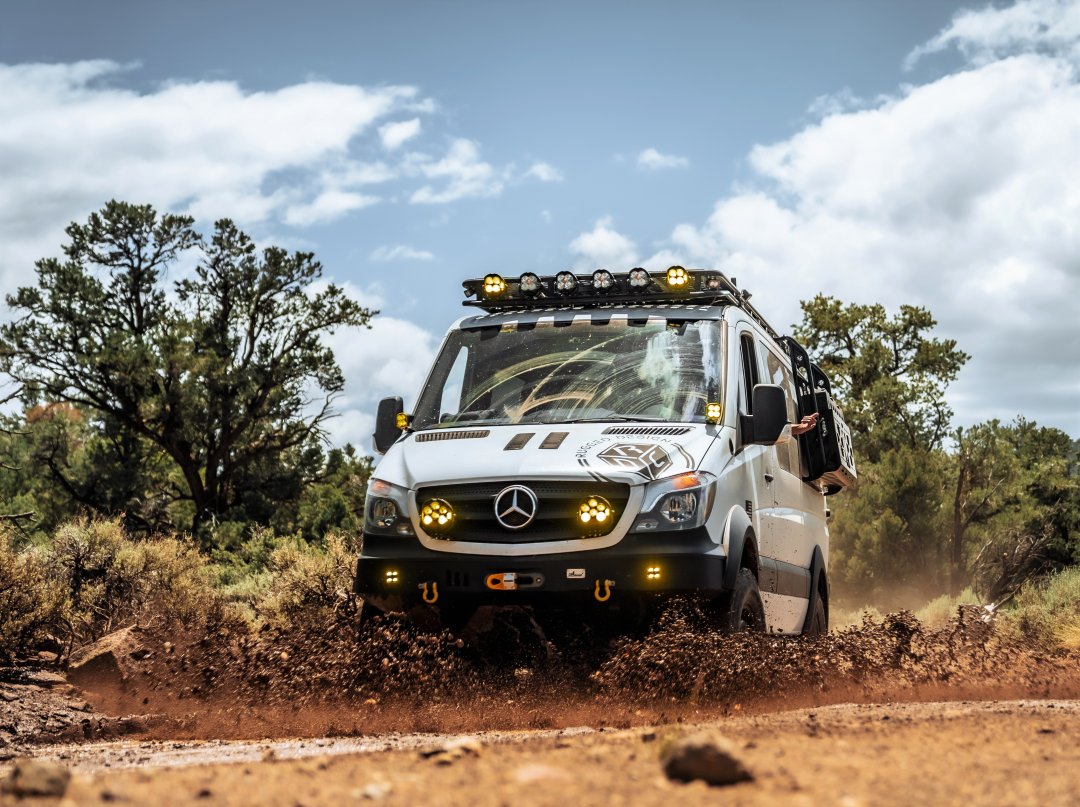 Lau got the idea to start his Sprinter Overland Trip after taking his van on a trip with others.

"They had more of your typical overlanding vehicles and I started to believe the Sprinter was capable of all those things. I built my van specifically to be able to do everything these other vehicles do.”

He says others didn't think it was possible.

“People thought I was crazy, but I was able to follow them or keep up with them.”

He started the group with two other partners- one is a professional navigator/Marine, the other as professional chef.

"I know this group and know that while they want adventure, they enjoy the finer things in life."

While on these trips, van owners can take their Sprinters out on the trails overlanding. SOT caters the trips and offers clinics to help the drivers learn more.

“It’s been exciting to see other Sprinter owners get excited about getting off the beaten path and not camp at an RV site that they were comfortable with," Lau said.

These trips take place all over in remote locations with multiple sites of interest.

“Not everybody wants to camp at a campsite. These vans and their abilities allow people to be remote. They want the adventure side of it.”

The first trip had 12 vans, but the upcoming trip in November, SOT's fourth, will have 40 vehicles taking part.

Lau rates the difficulty level of the overlanding on these trips as a three to five out of 10. However, he looks to educate the drivers and give them confidence to tackle harder trails.

“We do clinics on recovery, navigation, and safety. We want people to be confident in their off-road abilities, but also in what their Sprinters can do.”

His favorite part of the trips is the opportunity to meet new people.

“People want to go on these trips because of the community. They want to form friendships with people that are likeminded. Over a weekend, it’s great to see how these strangers become friends and then they start to travel with each other.”

Lau enjoys bringing his kids along for the trips and says experiencing the outdoors through their eyes is something special.

“I feel that humans belong in nature. I think it’s important to have that sense of nature and have that experience where they aren’t afraid of get dirty or climb a rock or tree. It builds confidence because you allow them to explore and they learn something from it.”

He says it's also a way for them to get outside their comfort zone.

“Kids naturally gravitate towards other kids. There’s not boundaries with kids. That’s the coolest part of camping for the kids- they create these bonds and friendships with the other kids that they want to hang out with them again and again. They’re making friends outside of their exposure and norms from at home.”

HANDHELD TWO-WAY RADIOS ON THE TRAILS

Communication plays a central role on each Sprinter Overland Trip.

“Before our trips we always recommend that our attendees buy Midland Radios. If they don’t, we provide the handhelds as a loaner.”

The SOT team assigns each attendee a call sign and works to make sure each driver knows how to use the radios.

“We do a short, really high level comms training with the group before the trip. We also teach them a little bit about radio etiquette.”

“It’s super important for coordination, especially with a group of 40 vehicles. It allows us to keep organized whether that’s making sure the group is tight, there’s oncoming vehicles, if someone gets stuck. We want everyone to have a radios so that they know what’s going on in the front and the rear.”

While Lau knows how important handheld two-way radios are to safety and communication, he also says people enjoy using them.

“There is a cool factor to comms. Everybody as a kid wanted to be something where they got to use a radio. It keeps them engaged so they’re not just driving for hours.”

He also says it helps attendees get to know one another.

"There's a bonding factor to the radios. As they're using their call signs, they're breaking the ice."

While Lau said the Van Life lifestyle is broad, he said it gives adventurers the opportunity to camp year-round, even as it gets colder.

“Ground camping and rooftop camping can be comfortable if you have the right gear so it’s doable, but a lot of these Sprinters are very well insulated. A lot of people have heaters that they add. They’re very comfortable.”

Lau said some of the "freedom" these vans give you is their ability to hold extra fuel. It helps owners take their vehicles off the grid and into changing climates.

“Right now it’s snowing in the Eastern Sienna’s like Mammoth in those higher elevation areas. A lot of people will go up there and find places to snow camp because they can just stay in their vans, park next to a hot spring, jump into the hot spring, and go back into their van.”

Camping became more popular than ever in 2020 in part due to the Coronavirus pandemic.

KOA also reported that interest in RV's and the RV lifestyle has also dramatically expanded. Among RV campers, ownership has risen 12% since 2019. 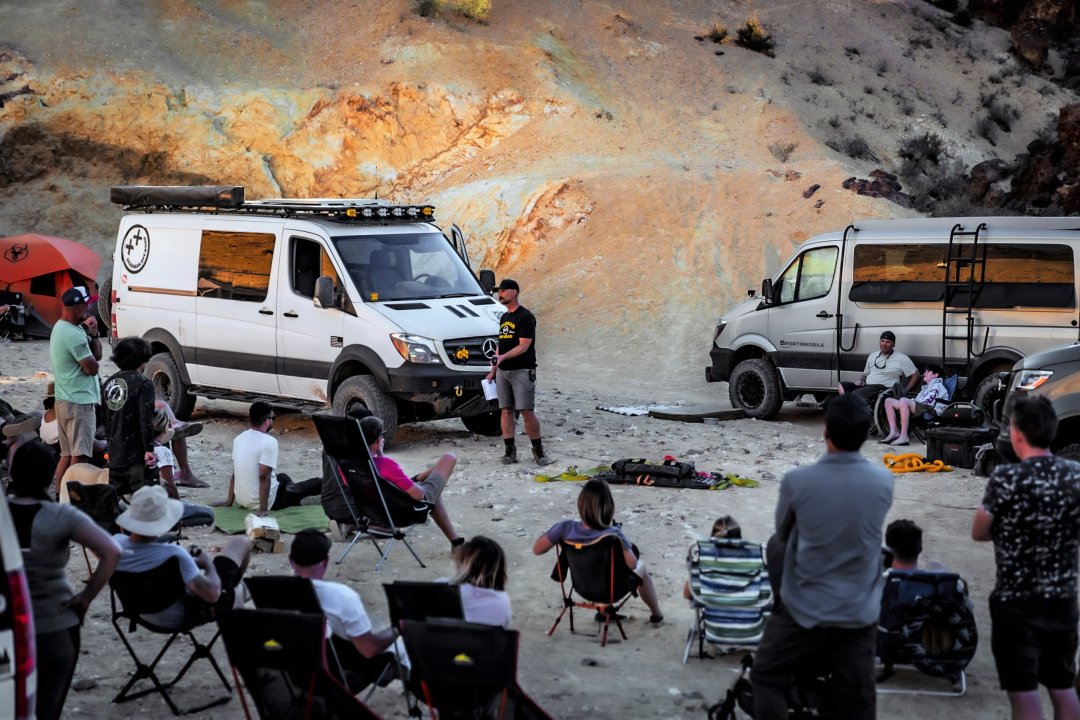