Midland Radio's Meteorologist, Bruce Jones, breaks down the storm that left behind death and destruction across portions of the United States on December 10, 2021.

December 10, 2021 will be remembered for one of the most historic tornado outbreaks in US weather history.  Not that winter tornado outbreaks are unheard of – they do happen. However, this outbreak produced a rotating “supercell” thunderstorm that stayed together for an obscenely long time, dropping a series of large, violent tornadoes along its 250-mile path.  One of those twisters devastated the towns of Mayfield and Dawson Springs in Kentucky.

Kentucky's Governor has reported over 70 deaths and more than 100 people who were unaccounted for as of Tuesday, December 14. He also said more than 1,000 homes in his state have been destroyed as a result of the storms.

Inside the Severe Weather

Most severe weather occurs in the springtime, when warm moist air from the south surges northward, then gets pushed aside by colder air from Canada.

Overhead, winds at airplane flight level are frequently racing at 100mph or more, and this “jet stream” provides a lifting action that can turn typical thunderstorms into destructive monsters.

Studying computer-generated forecast models, and relying on their own knowledge of severe weather harbingers, forecasters from the US Storm Prediction Center saw a Spring-like weather pattern developing and began discussing the potential for a dangerous tornado outbreak. Here are their severe weather forecasts from three days out, two days out, and from the day of the outbreak. Colors indicate expected intensity of the severe storms. 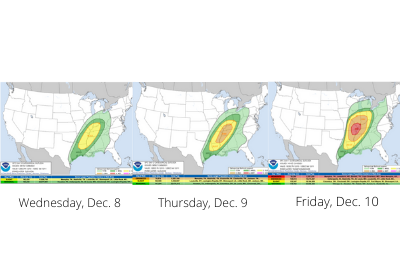 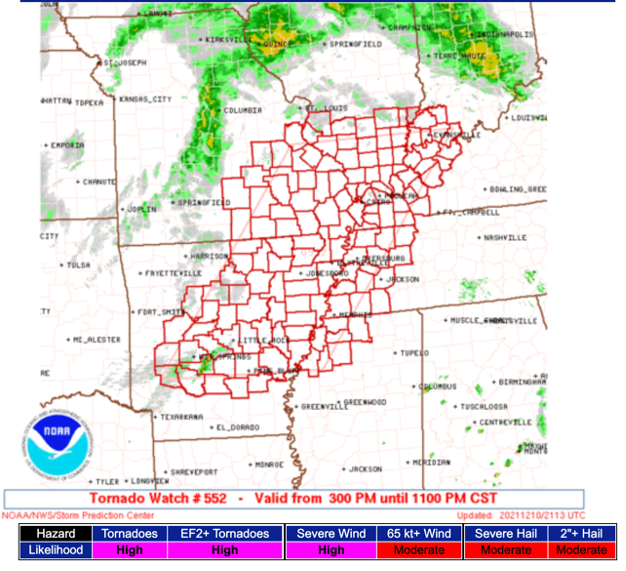 It was an excellent call.  Forecasters knew the combination of very strong winds and unseasonably warm temperatures at the surface (80 degree highs in December!) meant a tremendous supply of low-level energy was being pulled into this severe weather system.

One single rapidly-rotating thunderstorm, isolated from others and able to ingest fuel from the surrounding warm air, started near Little Rock Arkansas and for the next five hours held itself together. The storm tracked more than 250 miles and was responsible for spinning up numerous violent tornadoes from Arkansas to Kentucky. 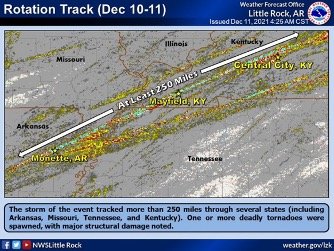 It is difficult for a thunderstorm to hold itself in “severe” mode for such a long time.  Normally, the storm will end up competing with others that erupt, robbing it of moisture, heat and wind. This storm, for whatever reason, was given a pathway of mostly unimpeded energy and it went on a rampage.

While tornado “watches” are issued by the Storm Prediction Center, tornado “warnings” come from your local National Weather Service office. The offices in Arkansas, Missouri, Tennessee and Kentucky did outstanding jobs issuing warnings, like this one from NWS-Paducah, Kentucky. It gave Mayfield, KY more than 20 minutes lead time on their incoming twister:

“At 9:04 PM CST, a confirmed large and extremely dangerous tornado was located near Cayce, or near Clinton, moving northeast at 55 mph.  This is a PARTICULARLY DANGEROUS SITUATION.  TAKE COVER NOW!  You are in a life-threatening situation. This tornado will be near Mayfield around 9:30 PM CST."

The United States leads the world in severe weather, but we also lead the world in our ability to accurately forecast it, and warn for it.

With the best weather satellites, the best radar network, and one of the world’s fastest supercomputers crunching numbers on our forecast models, our ability to save lives and property is unparalleled.

Every American should pay attention to the weather, and I say that not just because I am a meteorologist!

We now have the ability to alert you of the potential for severe weather days in advance.  And on the “day of”, your local National Weather Service office has round-the-clock top-tier staffing to monitor satellite and radar data, receive reports from storm spotters, and relay alerts faster than ever before.  This comes with much greater accuracy.

Of all the federal taxes you pay, approximately $3.50 a year goes to support the best weather forecasters on the planet.  It is an incredible bargain and the information they give to you could save your life, but only if you pay attention.  On a day when severe weather is expected; spring, summer, fall or winter, do this:

The risk of your home being swept away by a tornado is incredibly small, even in the middle of Tornado Alley.  However, if you have a plan and you have multiple ways to get warnings, you will sleep much better at night. You also won't worry when your kids are home alone.  You’ve trained them what to do and they have more than one way to get the alerts that can save their lives.

Regardless of the season, dangerous weather can occur any day or any night.  It is your responsibility to have a plan and be prepared.  That’s how we work together to build a Weather-Ready Nation. 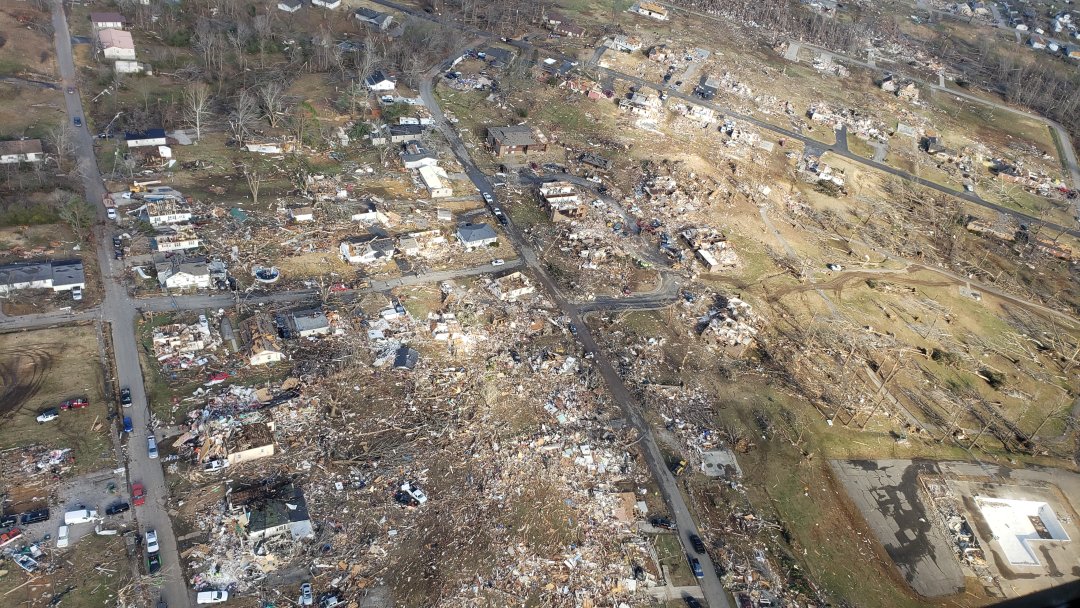