Midland Radio Partners Embark on Road Trip Across the World

Midland Radio's partners, the Hourless Life are embarking on a journey to drive across the world.

Midland Radio caught up with the family to share how their trip began, their travels thus far, and how two-way radios are playing a role in their adventures.

The Highlands are taking the world by storm and driving around it.

Eric was born in Seattle and served in the United States Coast Guard for 20 years before retiring.

His wife, Brittany was born in Canada, but raised in Texas. She is a freelance travel writer, working with outlets such as Overland Journal and Winnebago.

Their son Caspian was born in Austin, Texas in 2016. Brittany said he has never known anything other than full-time travel.

"He is friendly, curious, and flexible," Brittany said. The couple began traveling full-time by vehicle in 2014. In the beginning it was by RV.

They first heard the term overlanding in 2018 and as they learned more, something sparked their interest.

"We still loved discovering new places, but there was no challenge in that lifestyle anymore. We were itching for a fresh style of travel that would take us farther off-grid. Overlanding was the perfect next step," Brittany said.

Seven months later the Highlands sold their RV home, meaning they now lived in their Jeep Wrangler with Caspian, two at the time.

They added a rooftop tent, put a fridge in the back, and embarked on a 2,000 mile journey across interior Mexico. It was a life-changing adventure.

"The trip was amazing and confirmed a goal we'd been keeping a secret- we were getting ready to drive around the world."

They expect their global circumnavigation to take 10 to 15 years.

For the family, it's all about building lasting memories together.

"It's definitely a gift to spend so much time together as a family, especially with our son. He is getting a hands-on, five-senses-engaged, global education. We can't wait to see what he'll do with this experience as he grows into adulthood." TRAVELING ACROSS THE WORLD

Caspian, now five, has spent at least one night in all lower 48 states and visited 37 of the 63 U.S. National Parks.

"He's quite proud of all his Junior Ranger badges."

The family has also traveled to Canada, driven the length of the Baja Peninsula, and spent eight months total driving through mainland Mexico. They have also explored every country in Central America and on November 6, 2022, they expect to set foot in South America.

After South America, the Highlands plan to ship the Jeep to South Africa. They'll drive up Africa, then across Europe and Asia. The family intents to complete their drive around the world in Australia, estimating that Caspian will be somewhere between 14 and 19 years of age.

While building memories together is incredibly special, experiencing other cultures is unlike anything else.

"Bigger than us, it's a privilege to meet people across the world, especially our Latin America neighbors. Their hospitality has been humbling and we're grateful they've allowed us as outsiders into their lives."

Brittany said the family's favorite place to travel thus far has been Mexico.

"Mexico is a vibrant, diverse, musical place with beautiful people and gripping history. Unfortunately, there are many myths surrounding Mexico (and travel in Mexico) within the United States. Our three extended trips through the country opened our eyes to the truth, and now Mexico has our hearts."

However, each individual place they travel offers different experiences.

"Each country is unique in its off-roading opportunities. Baja is undoubtedly the best for off-roading right on the doorstep of the United States. Being able to beach camp anywhere around the peninsula is like entering a magical world of salty freedom."

Off-roading outside the United States isn't without its difficulties.

"Interior Mexico and parts of Central America can be tricky for off-roading because there isn't the BLM (Bureau of Land Management) and National Forest Land we're used to having in the U.S. Once you get to Costa Rica, it's easier to get off the beaten path and find places to camp, including stunning beach spots." TWO-WAY RADIOS ON THE JOURNEY

"We have to be careful with our communication devices while traveling through foreign countries. Going through border crossings and police/military checkpoints, it would be suspicious for us to have a large radio mounted on our dashboard. The officials might think we had a military affiliation and we definitely want to avoid that."

To avoid this, the Highlights chose to grab two sets of Midland handheld two-way radios.

"So far, we've used them to guide a stuck motorist during a recovery and to lend to friends in another vehicle during a day of exploration."

Midland Radio's walkie talkies were essential during a rather funny portion of their trip to Mexico.

"We were navigating a narrow passage to get to our camping spot for the night. Vehicles were parked tightly together on the passenger side and the driver side was crowded with vendors selling food and trinkets from carts. Pedestrians were swarming everywhere. We were inching our way through when a large van met us head-on. As the smaller vehicle, we had no choice but to pack out through the passageway.  Once the van was clear, Brittany ran ahead with the  Midland Radio handheld to make sure the route was clear. We barely made it through before oncoming traffic approached again."

Overall, Midland Radio's two-way radios provide the traveling family with a sense of security. Their trip to the remote edge of the Grand Canyon proved no different.

"Brittany got up before sunrise to hike to the bottom of the canyon, taking a Midland handheld and leaving the other with Eric in the tent. When she arrived at the water's edge, she took off her boots to soak her feet and enjoy the view. After a few minutes, she was startled to notice fresh mountain lion tracks next to her. Though no mountain lions were actually sighted during this multi-hour hike, an incident like a snake bite or rock slide could quickly make a Midland radio the most important item in a pack," the family said. When deciding which two-way radio to get ahead of their journey, the Highland's knew Midland Radio was the right choice.

"For us, there was no choice but Midland. The reputation of the brand speaks for itself. We know of no competing company that creates more dependable devices when our very lives could depend on our ability to communicate," Brittany said.

"Since we started off-roading in 2016, moving into global overlanding a couple of years later, we've never experienced a failure of any Midland product. For every terrain and weather condition imaginable, we recommend Midland Radio to our community without reservation."

For them, range makes a difference.

"There have been many times during our extensive travels when the extreme range of the MXT400 has allowed us to stay in communication with one another. For example, this is great when one of us is at camp and the other is out on the trail." 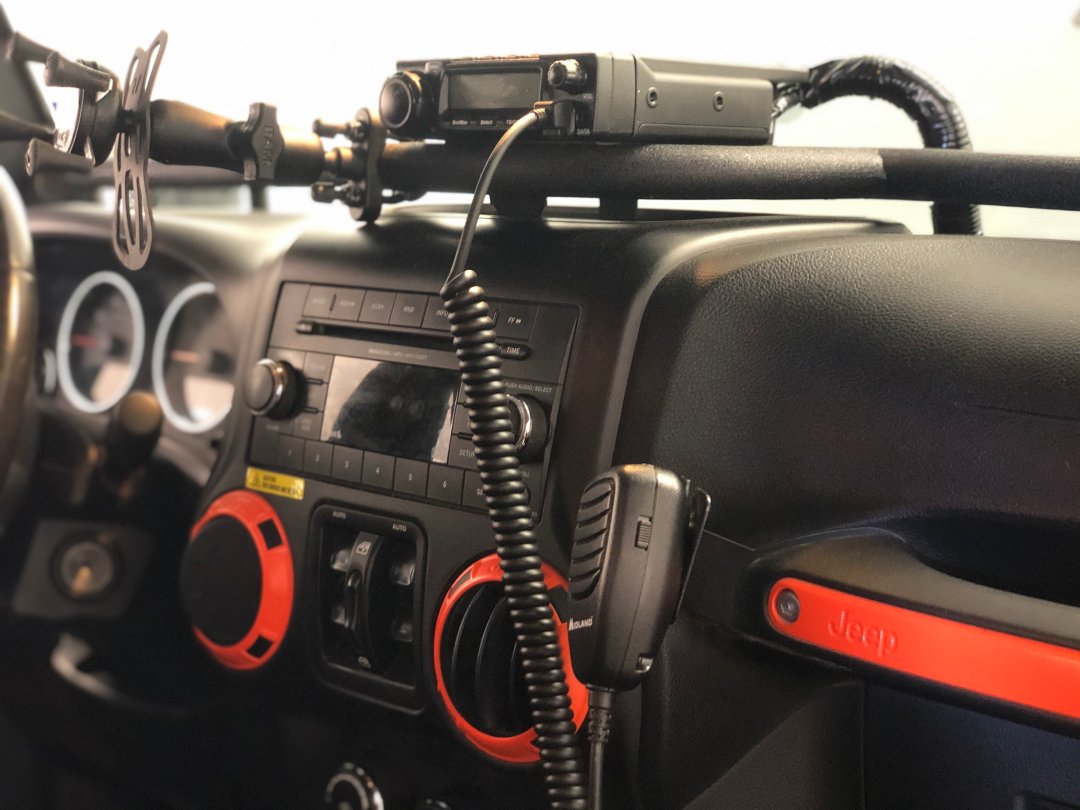