Midland Radio and onX Partner to Ensure Safety on the Trails

Midland Radio and onX Off Road have been partners for several years.

Together, the brands bring two-way radio communication and GPS mapping to ensure off-roaders' safety on the trails.

onX was founded about 11 years ago as a navigation and mapping app for different recreational activities.

“We started primarily as a hunting map software. It was just a map software via a chip for handheld GPS units for the state of Montana," Griffen Gilbert with onX Off Road said.

Approximately seven years ago, onX expanded its business launch its app nationwide and include onX Off Road and onX Backcountry.

“Our apps allow people to know exactly where they stand, areas to discover to recreate around, stay legal while they’re out playing in the woods, share their adventures, and relive their most favorite experiences," Gilbert said.

ABOUT ONX OFF ROAD

Gilbert said his team works to ensure the trails on its apps are safe for all its users.

“We have a team of trail guides that are verifying that the trails are legal to ride on, adding photos and descriptions, putting together difficulty ratings. We’re adding what we call, ‘guidebook quality content’ so people can discover and really know what they are getting into before they hit the trails," Gilbert added.

Part of the goal is to decrease the amount of time users are getting stuck on the trails. Midland Radio and onX Off Road began its partnership several years ago.

Bringing together two-way radio communication and GPS Mapping was a natural fit.

“Both of our products go hand in hand for off-roaders. Both companies offer tools that help enable the off-road experience while people are out on the trails and even planning ahead of their trip.”

The partnership makes for an enjoyable, safe experience.

"With onX, you can know exactly where you are, what trails you’re going to be taking, and which way you want to take to make sure you get back home safely. With Midland products, you're communicating out on the trails. If you lose sight of your buddy you can let them know where you are, if any problem comes up, you need that communication to get to safety. With mapping and communication, it gives off-roaders an overall better experience while out on the trails.” TWO-WAY RADIOS AND THE TRAILS

In mid-June, the onX Off Road team met up to take on the trails in Pipestone, Montana.

"It’s got phenomenal terrain and probably a hundred plus miles of trails to explore out there. We rode 94 miles all together.”

The team rented side by sides.

“We got to get out on the trails together which was really awesome because we got to do the activities that we're making products for," Gilbert said.

“Heading into it we knew had 14 vehicles, we realized communication could be difficult. With onX, we have the tools to know where we are. It was especially important since some drivers were more confident than others. Some of us would end up a little further behind and ideally at a trail split we would wait for one another, but we would be able to communicate with one another thanks to Midland walkie talkies."

Each driver had a two-way radio throughout the trip.

With both onX Off Road and Midland's two-way radios, the team had a safe trip.

“The walkie talkies and onX combined made it so easy for us to keep in touch about where we were. Combined, it just made for a very safe time on the trails. Because of these two products, there were no major hiccups," Gilbert added.

Not only did the two-way radios ensure communication for safety purposes, but also allowed the team members to bond throughout the event.

“We were also able to give them heads up about any mud puddles. Our vehicle hit a big mud puddle and we had a wave come into a vehicle. That was around the blind corner and we were able to radio the others to give them a heads up.”

Even though Midland Radio has been a partner of onX Off Road for years, GIlbert was impressed by the reliability of the two-way radios.

“The two-way radios made for easy communication that we could rely on.” 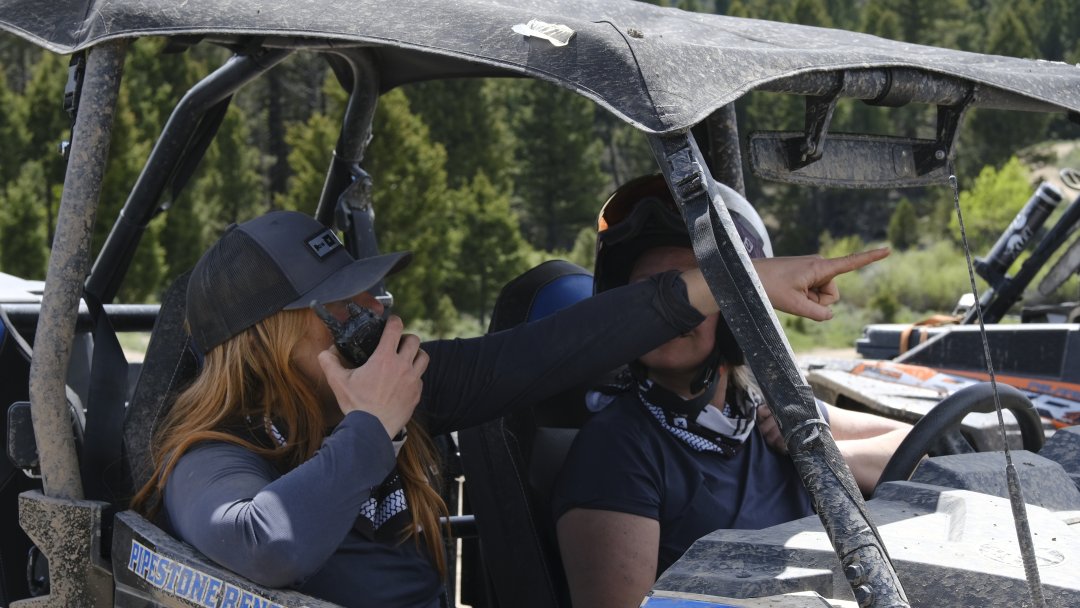