As severe weather season begins across America, Midland Meteorologist is taking a look at each region to share unique weather characteristics, local storm stories, tips to prepare yourself, and more.

Based on a ten-year period of record (2005-2014) Alabama holds the heartbreaking distinction of having the most tornado fatalities in the United States. Due largely to the Dixie Alley Tornado Outbreak of April 27, 2011 the Yellowhammer State recorded 269 deaths in ten years. 253 of those recorded deaths occurred on April 27th. 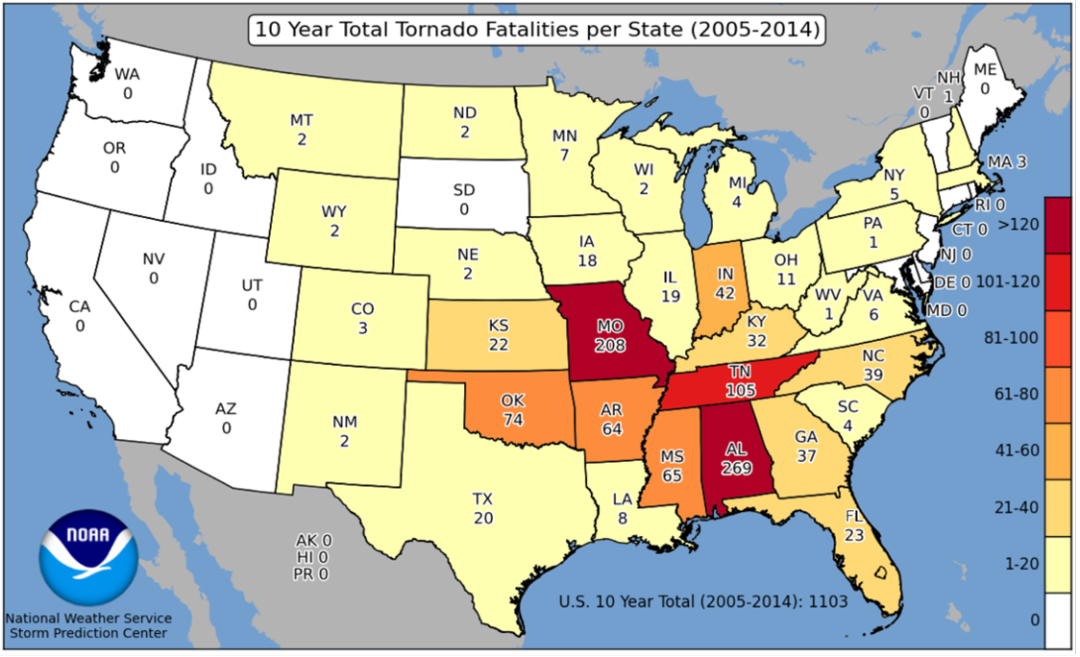 Situated along the coast of the always-warm Gulf of Mexico, Alabama can get tornado activity any month of the year.

During March and April, strong jet stream winds pass over the southern states, dynamically forcing thunderstorms into rotating supercells, bringing on the most intense and dangerous season of the year.

Incidentally, hot and humid July has the fewest tornadoes in Alabama. That's because July is when upper air currents are lightest, allowing afternoon showers to generally rain themselves out in a non-severe manner. 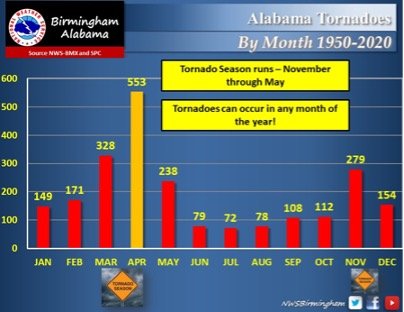 Alabama tornadoes are most common in the late afternoon or early evening, with a peak of activity around 5pm, but they can happen at any hour.

On April 20, 1920 an EF4 tornado killed dozens in Marion, Franklin, Colbert and Lawrence counties around 8am.

The chart below shows the most common times of day for Alabama tornadoes.  Winter tornadoes often occur after dark, making them particularly dangerous. 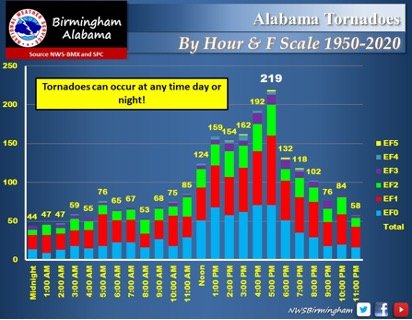 Curiously, there seems to be a “mini Tornado Alley” running through northeast and north-central Alabama, a plateau known as the Southern Cumberland System (SCS).  It’s possible that the topography of the area’s hills and valleys are properly oriented in that they help funnel low-level winds into severe thunderstorms. This increases the chance of a tornado.  That may be part of the reason Marshall County recorded fifteen tornadoes on April 27, 2011, including two violent EF4’s.  Seven twisters touched down in the morning, eight in the afternoon. 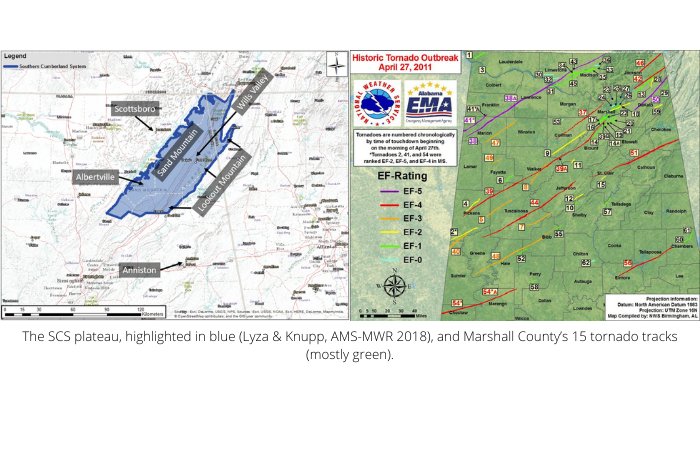 For Severe Weather Awareness Week in Alabama, keep the following in mind:

GETTING A MIDLAND WEATHER RADIO

NOAA Weather Radios are one of the items needed in order to ensure you have multiple, redundant ways of receiving weather alerts.

Midland Radio has several different options, suited for you and your loved ones in any environment you might find yourself in.

These radios give you the time you need to seek shelter in any weather emergency.

Here are a few you should make part of your emergency kit.

When you're at home or at work, ensure you have a desktop weather radio.

Midland's WR120 is the gold standard of NOAA Weather Radios with its S.A.M.E. EZ localized programming.

With over 60 kinds of weather hazard or emergency alerts, Midland's WR120 will notify you anytime the National Weather Service issues a watch or a warning.

Your cellphone is just one way to receive weather alerts. When you're on the go, you never know if you'll get service or if a storm will destroy a cellphone tower.

Midland's ER210 is another way to receive the necessary weather alerts.

Whether you're out on the trails or evacuating your home ahead of the storm, this radio will keep you up to date on the latest information with its several power options including solar, hand crank, and rechargeable batteries.

With your Midland ER210, you can also keep your other devices charged with a USB charging port.

This is the perfect radio to keep you safe as you're on the go. Sweet Home Alabama is a wonderful and beautiful state, but it has a severe weather risk. Arm yourself with knowledge and information and you’ll help your family and your state be part of our Weather-Ready Nation.