What Are Radio Waves & How Do We Use Them?

From cell phones to television and microwave ovens, radio waves play an essential role in our everyday lives. Revolutionizing communications technology more than 120 years ago, the introduction of radio ushered in a new era, allowing the wireless transmission of information.

What are Radio Waves?

Radio waves are a type of electromagnetic radiation, first discovered in 1887 by the German physicist Heinrich Hertz. Radio waves are essential to radio communications and radiodetermination. In a vacuum, radio waves travel at the speed of light. On Earth, radio waves still travel at close to that speed but are slowed by the atmosphere.

The radio-frequency spectrum occupies one of the seven regions of the electromagnetic spectrum. The other six are microwave, infrared, visible light, ultraviolet (UV), X-rays, and gamma rays. Each region has different wavelengths, frequencies, and energies.

Radio frequency (RF) refers to the oscillation rate of radio waves. Hertz is a unit of measurement equal to one frequency cycle per second; therefore, 300 GHz is equivalent to 300 billion cycles per second. In contrast, UV, X-rays, and gamma rays have the shortest wavelengths.

It may not seem like it, but cell phones, including modern smartphones, are two-way handheld radio transceivers (transmitter/receiver) that communicate with cell networks by transmitting signals to, and receiving signals from, cell sites.

What are radio waves? They are a way of accomplishing multiple tasks, including determining your position relative to a reference point or detecting an object on the ground, at sea, or in the air. Radio waves are divided into the subgroups of radio navigation and radiolocation.

Radar (Radar Detection and Ranging) is the most famous example of radiolocation, using radio waves to detect the distance, velocity, and angle of objects. Radar is used extensively by militaries worldwide to detect hostile aircraft, missiles, rockets, and other moving objects.

Outside of military applications, meteorologists use radar for weather tracking, forecasting, and civil aviation.

Radio navigation allows an aircraft to obtain bearings using a radio transceiver to transmit signals to radio beacons on the ground, regardless of weather conditions or visibility.

How You Can Use Radio Systems

Radio waves are used extensively for communications and transmitting information wirelessly. This takes multiple forms, including cellular telephones, fixed and mobile radio stations, and satellite communications to a television.

Commercial radio-communications devices fall into several categories, from portable handsets and amateur (Ham) radio sets to GMRS (General Mobile Radio Service). Here are some of the practical applications of radio waves in your daily life. 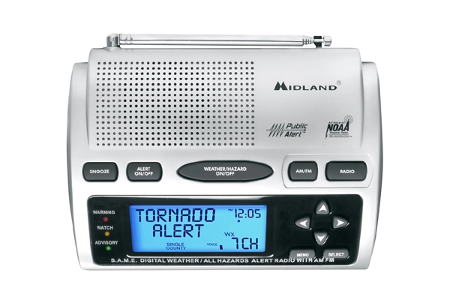 AM and FM Radio

AM (amplitude modulation) and FM (frequency modulation) are two methods by which radio systems transmit information. AM and FM radios change the variations in either the amplitude or frequency of the carrier wave.

You can benefit from AM or FM radio waves in your own home by investing in a weather alert system like the WR300 AM/FM Weather Alert Radio. It features automatic alert override to independently switch between AM and FM to provide warnings of hazardous conditions. You can also customize your warnings by adjusting the alert siren’s volume, and there are color-coded alert indicators for a visual cue that you need to be wary of inclement weather. 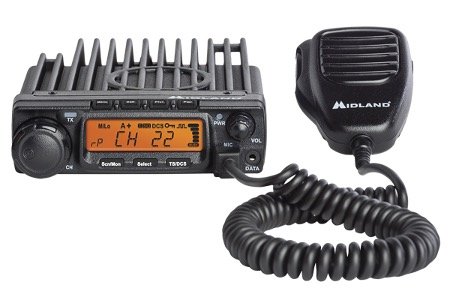 If you’re planning on driving through desolate areas during a road or camping trip, it’s worth having a way of communicating that doesn’t rely on cell sites. Cellular coverage can be intermittent and unreliable throughout rural parts of the United States.

The Midland MicroMobile MXT400 is a 40-watt General Mobile Radio Service (GMRS) two-way radio that would make a good addition to an RV. Featuring 8 repeater channels, 142 privacy codes, 15 high-power GMRS channels, the MXT400 allows you to communicate with handheld GMRS radios on channels between 462 MHz and 467 MHz. In unobstructed environments, the MXT400 has a maximum range of 65 miles, ideal for transmitting and receiving in rural areas and on the open road. 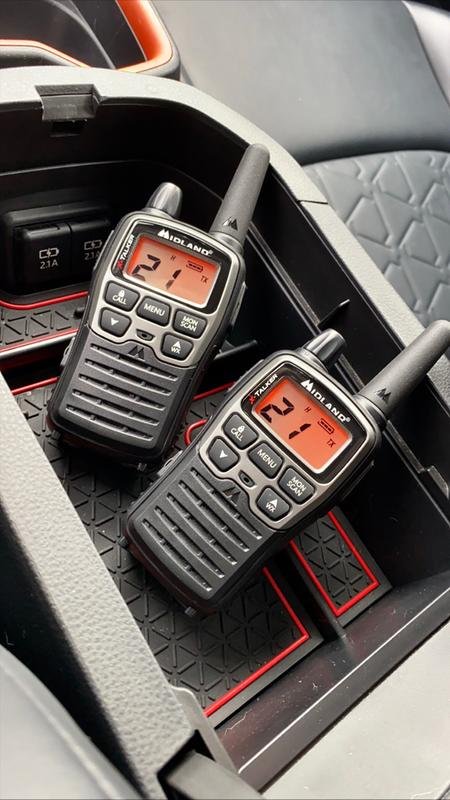 When camping, hunting, fishing, or hiking in outdoor and wilderness environments, keeping in touch with friends or family members is critical for your safety.

A walkie-talkie is a two-way handheld transceiver (radio transmitter/receiver). The Midland X-TALKER T71 is an excellent example of this kind of technology, allowing you to communicate wirelessly with another person up to a distance of 38 miles, depending on obstructions.

Featuring 36 channels, 121 privacy codes, channel scan, and a battery life of up to 15 hours, the X-TALKER T71 is suitable for a wide variety of applications, from hunting and camping to hiking. The X-TALKER T71 is lightweight, at only 6.2 oz., and is powered by two 1,000-mAh rechargeable battery packs (included) or 3 AA batteries. To conserve battery life, you can adjust the transmitting power using the Hi/Lo settings.

How We Can Help

Established in 1959, Midland Radio has been at the forefront of radio technology for more than 50 years. Headquartered in Kansas City, Missouri, Midland introduced the 14-channel FRS (Family Radio Service) system to the market. Today, we offer a wide array of two-way radio devices for various applications, from recreational and industrial communications to survival preparedness.