Midland Radio spoke with Tim (TC) Bougie with Storyteller Overland to talk about how he's hoping to educate van overlanders about the proper ways to take their vehicles off-road.

He shares how Midland's partnership and GMRS radios are making a difference in that effort.

Bougie does a lot of overseas work, sometimes gone for periods of 60 to 180 days. He was looking for a vehicle that he could take with him to explore when back in the United States.

“I was just a guy looking for a van. I looked through a lot of options and I ended up settling on Storyteller Overland Mode 4x4s," he said.

It wasn't Bougie's first time owning an overland vehicle, fit for sleeping under the stars.

“I had owned previous vehicles that I have outfitted to go camping and do this type of overland adventure so I’ve had a couple Toyota Tacomas with the rooftop tent. I had a Ford F-250 custom camper with a lot of adventure spots.”

“I like to do a lot of adventure sports in the winter, whether that be skiing, snowboarding, snowshoeing so it’s nice to have 4x4 in the winter along with the rest of the year with backpacking, mountain biking, or paddle sports. It’s a great vehicle to have as your home base.”

Bougie also said having an overlanding van allows him to take in more remote areas of the country.

“You really do have the ability to get a little further out there and stay at these undisturbed, dispersed campgrounds where you might see a couple vehicles out there so you have a little more freedom to choose where you want to stay.” 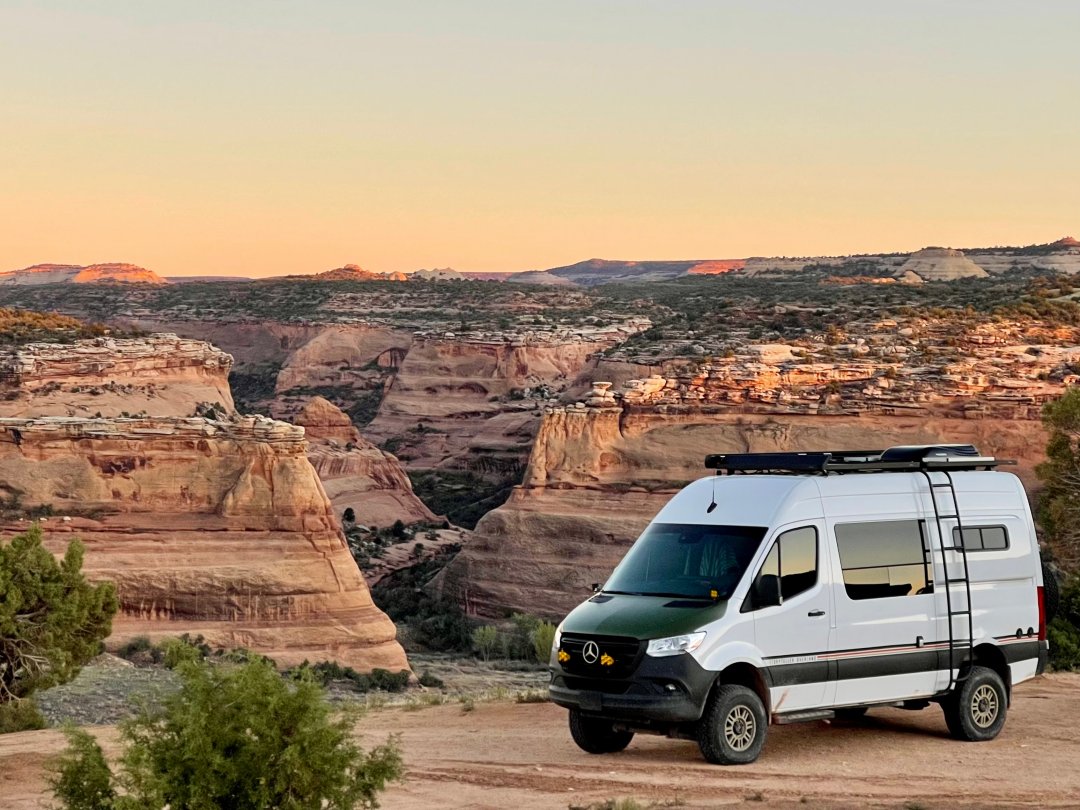 Bougie travels across the country with Storyteller, representing them at expos and hosting overlanding safety courses.

While he purchased his van in Colorado, Storyteller is based out of Birmingham, Alabama.

Bougie first connected with the company a few weeks after purchasing his van.

“Within a few weeks I was boondocking which means you’re parked at a primitive camp spot where there aren’t typical RV hookups. I was just there near the Arkansas River in Colorado. Some of the Storyteller people saw an Instagram of me and they were also nearby.”

The group ended up stopping by Bougie's van.

“We just got to know each other. It was just such a cool experience to have the CEO of this van company come by. It really gave me my initial impression of the company.”

Bougie said he saw the interest in overlanding styled vans rise ahead of the Covid-19 pandemic.

“The overlanding industry was already booming pre-Covid because people wanted to get out and explore utilizing their vehicle."

However, once the pandemic hit, Bougie saw that interest skyrocket.

"When Covid hit, the RV industry started to boom again because you had all this international travel shut down. People were looking at what they could do within the United States. That ended up being exploring national parks. They saw this surge and we haven’t seen the end of that and I don't think we will for a while.”

According to KOA's 2021 North American Camping, report, the number of U.S. households that consider themselves campers, grew by a record 3.9 million in 2020. Of first-time campers, 55% say their reasons for planning a trip in 2020 were a direct result of the Covid-19 pandemic. RV ownership have also grown by 12% since 2019.

“More people were working remote so they didn’t have to stay at home. Now, as long as they have connectivity, they can work wherever," Bougie said.

The more Bougie got involved with Storyteller Overland, the more he wanted to help other owners learn how to properly navigate their vans off-road. Midland Radio has been a close partner in his effort to do so.

“There is a need and there is a demand for off-road driving and off-road recovery that is specific to the van space. Until recently, there haven’t been a lot of courses for the unique experience of driving a 10,000 pound sprinter van off-road," he said.

He began working with Storyteller Overland to put together the first course. Bougie hosted that in October alongside 4x4 instructor, Bill Burke.

“I knew I wanted to pair not only the driving and recovery aspects of the vans, but kind of some of the prerequisite skills that go into this overland space. For me, that included the ability to read a paper map, the ability to use some of the current GPS/navigation apps, knowledge of what the proper communication devices are like GMRS radios.”

Because it was the first course, Bougie opened it up to 12 vans, with two people per vehicle. He said the class filled up within two and a half hours of announcing sign ups.

“That reinforced that there was this demand.”

The two and a half day course also featured a sprinter technician on-site.

“They were able to provide owners just the baseline information on their vehicles like the maintenance that was involved, the inspections you want to do pre and post trip, how to build a specific toolkit for their sprinter van. There was a lot of value in that so we will replicate it in the future as well.”

Bougie said because of how quickly slots in the first course were filled, he plans to do four in 2022, hitting locations across the country.

“We got a lot of people replying asking when we could do it in the Northeast, the Pacific Northwest, and California so the intent is to kind of rotate locations and get different subject matter experts to provide the off-road recovery and driving training.”

One of Bougie's priorities is to include some emergency medical preparedness training in the next course.

“Even though you might not have any training as a first responder or a medical provider, having the right equipment in certain areas and knowing how to use it is important. You might encounter some emergencies so it's important to understand the communication aspects like talking with emergency services and how to give them your location if you need help," Bougie said.

While there are other education overlanding trips for the van life community, Bougie wanted his course to focus on making sure our owners are prepared for anything.

“The social aspect was there, but we also wanted some helpful knowledge. People got to come together with other owners, but also to develop as owners," he said.

The more owners educated, the better.

“My intent was that I want the community to be strong and educated. Every owner that we train in that space, their knowledge will be shared with others in their interactions within their communities.”

Storyteller Overland's next course will be in the Uwharrie National Forest in Troy, North Carolina. 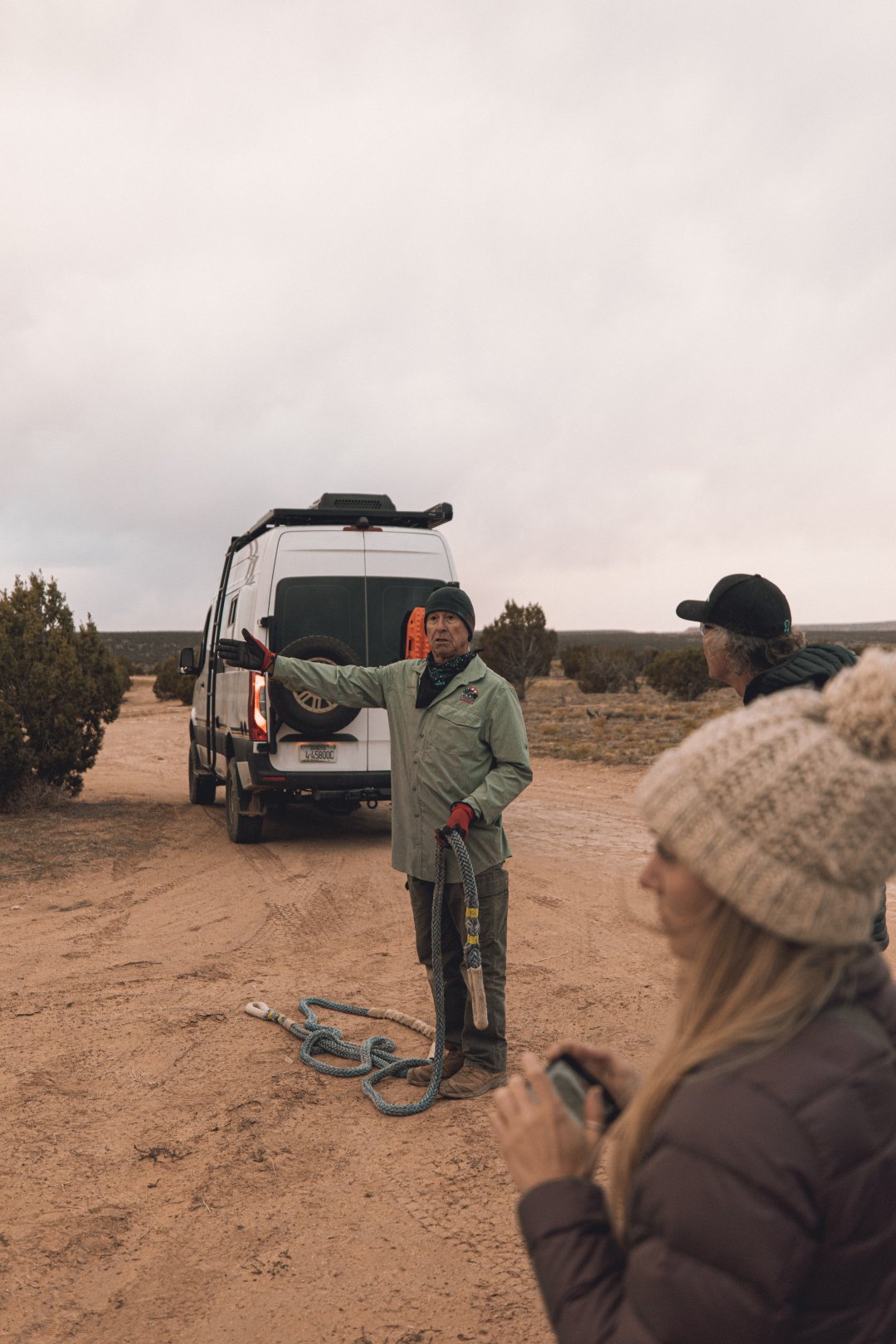 Bougie knows just how important communication is to the overlanding van life community. That's why he makes understanding radios an important focus of his courses and partnered with Midland Radio.

Midland outfitted Bougie's van with an MXT275, MXTA26, and an MXTA22. We also provided Bougie with 12 sets of GXT1000VP4s for the participants in the training course.

“When we’re doing these trips and have a convoy of vans, having the 275 is nice and I don’t have to worry about charging it. I use a pair of X-Talkers if I have to get out of the vehicle.”

When traveling in groups like he often does as part of his training courses, Bougie says GMRS radios are imperative.

“When there is more than one vehicle, it makes communication amongst the entire group a lot easier. Whether that is coordinating bathroom breaks, or a spot to stop and eat lunch, it makes that communication much easier.”

Even when he is on a trip separate from the courses he plans, Bougie knows that having radios provide bring a long a sense of convenience while with a group.

"Instead of calling or texting, having the two-way GMRS radios makes it a lot easier to contact one another. Once you get to a location it makes things easier. You have people that want to stay in the vehicle, some that want to go mountain biking, so to have the radio as an option, it just makes communication that much easier," he said.

Not only does having a Midland GMRS radio provide safety in terms of communication, but also in terms of staying alert within your surroundings.

“A lot of Midland’s radios have the ability to obtain NOAA Weather Radio.

Being able to get weather information in the absence of a signal is another key safety feature that the radios provide," Bougie said.

He understands that even when you're out overlanding alone, it's important to have a radio. Whether it's for the weather alerts or to be able to reach someone should you need help, Bougie's communication knowledge is deep. He worked as an Army Special Forces Communicate and Special Operations Terminal Attack Controller.

He recommends Midland's GRMS radios because of their durability, reliability, clarity, features, and prices.

“There is just a ton of capability in a very small package. The bang for your buck is high.”

Overall, with the right skills and equipment, overlanding and traveling in his Storyteller van is something Bougie can't beat.

“It really is just having a tiny home on wheels.”