Midland Radio donated two-way radios to support volunteers and for raffle items at the Jeepers Back the Blue Jamboree in Delaware.

ABOUT JEEPERS BACK THE BLUE

Jeepers Back the Blue is a non-profit organization out of Delaware.

The organization raises money for the families of fallen police officers. It focuses on officers that pass away while on active duty, but not in the line of duty. This could be of causes like heart attacks or cancer.

Lehnert wants to help families who might not receive that same level of help.

“A police officer out jogging with his son might have a heart attack and die. It’s tragic, but you don’t get the influx of financial support. After it’s all said and done and the funeral is over, people don’t remember that name like a line of duty death. A lot of these officers have families with kids at home. They're not just losing a parent, but also a source of income.”

Lehnert is no stranger to the law enforcement community.

“I’ve been with the State of Delaware as a Senior Probation Officer. I’ve been with them since 1997. It’s all I’ve ever known. We work hand in hand with multiple police agencies. I bleed blue just because I know the camaraderie that you find within law enforcement."

He started the organization after honoring a fallen Delaware officer, killed in the line of duty after a standoff.

"I just wanted to share respect for him and knew the Jeep community are big supporters of law enforcement. I put together a convoy. We wound up having about 75 Jeeps that ended at his troop. Everyone loved being part of that and said we needed to do it again. We put something together the next year and went from having 75 Jeeps to 709 Jeeps in one year," Lehnert said.

Jeepers Back the Blue has helped 20 families in 15 states.

"It’s not life-changing by any means, but if it helps pay some bills, it’s put towards their kids’ college funds, it’s worth everything."

While the organization raises most of its money through the jamboree event, it also sells merchandise online and through attending other Jeep events. 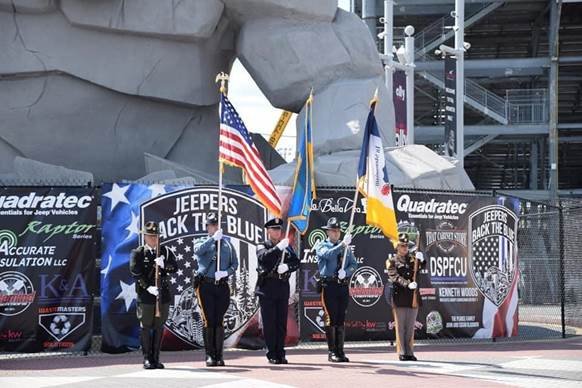 JEEPERS BACK THE BLUE JAMBOREE

Jeepers Back the Blue raises most of its money through its jamboree.

The group held its 5th Annual Jeepers Back the Blue Jamboree at Dover International Speedway in September 2021. This year there were 896 registered Jeeps and it raised over $125,000 over two days.

“These Jeeps come from 10 or 12 different states. It’s not even just a local thing. It’s gotten to the point where it’s from Massachusetts all the way to North Carolina.”

At the event Jeepers get a chance to drive around the track, enjoy live music, attend a kick-off party, camp, visit different vendors, and participate in raffles.

Those attending also get to experience law enforcement demonstrations from helicopters, K-9's, and more.

“We have law enforcement come to the event. They drive Jeeps. They get to see the support they really have.”

The event pays tribute to every officer its helped with a memory wall. A banner shares the faces, names, and departments the organization helps.

"This shows their family that their loved one will never be forgotten. The families are just so overwhelmed and honored that not only do we help them, but we continue to honor their loved ones year after year.”

Midland Radio donated a set of almost 20 business radios for event volunteers to use.

"The radios are invaluable. This event is spread out over a probably an entire Nascar track and we use a lot of their parking lot. It could be a five-minute car ride to get from one end to another so having the radios to be able to coordinate our volunteers saves us a ton of time and money.”

“These Jeepers go off-roading and we need radios for when we go on trails. It’s extremely important to be able to communicate when you don’t have service.”

THE FUTURE AND IMPACT OF JEEPERS BACK THE BLUE

Lehnert said he has seen just how much his organization has helped the families of fallen officers.

“There’s sometimes when I don’t have direct contact with the families because it is too raw and fresh. I may never hear from them. That’s okay. There are times when I’ve become Facebook friends with them and they follow the event.”

The money often goes beyond helping pay bills or setting up college funds.

"We've even paid for a woman's funeral because nobody else could afford it."

Helping these families has been unlike anything else Lehnert has been part of.

"It's an honor because I get to be the voice of thousands of Jeep owners who are so thankful for these officers."

Lehnert is confident the event and organization will only continue to grow in the coming years.

"I’d really just love to see the event grow. I just want to see this get the recognition it deserves which will bring in more money which will allow us to help more families.”

The event is put on by all volunteers, none of which get paid. Lehnert says these volunteers are also inspired by the event's success.

"Nobody gets paid. It's almost like a movement. This year has exceeded anyone's expectations and we are proud as to how far it's come." 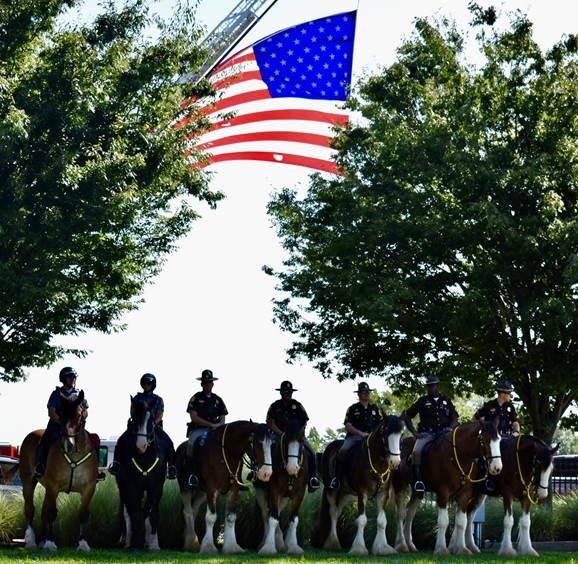