Looking Back- The Wild, Weird Weather of 2021

Ahead of the New Year, Midland Radio Meteorologist, Bruce Jones reflected on the weather of 2021.

I’ve been interested in weather for most of my life, motivated by the infamous Palm Sunday Tornado Outbreak in 1965, but I’m hard pressed to find a more bizarre year of weather than what the United States experienced in 2021.  Extremes of temperature, precipitation, wind, and tornadoes re-wrote the history books.

Texas suffered a terribly cold winter in 1989 and a devastating blizzard in 2011, so they expect occasional winter stuff.  But the arctic outbreak of February 2021 brought such brutal cold that power systems froze, entire cities suffered from rolling electrical brownouts or lost electricity entirely, and more than $190 billion in damage was done.  It is estimated more than 200 people died from cold-related causes. Dallas set a record low temperature on February 16 (-4 degrees), and recorded windchills as cold as -16.

Record Heat in the Pacific Northwest

June was the hottest month on record in North America and the worst of the heat shattered all-time high temperature records in Oregon and Washington.  Seattle reached 108 degrees on June 28 while Portland, Oregon sizzled at 116, smashing their old record by fourteen degrees.  The next day Peshastin, WA established an all-time state record high temperature of 119. This brutal heat helped desiccate trees and shrubs, leading to a devastating season of wildfires.

The Volunteer State has never seen it rain as hard as it did on August 21, when a gauge in Humphreys County recorded 17 inches in 24 hours.  That unprecedented amount of water caused devastating flash floods, washing away more than 200 homes. In Waverly, two schools were destroyed, but luckily the flooding occurred on a weekend, when no children were inside.

California’s capital city had gone without a drop of rain for 212 days, the longest dry spell in its recorded history.  That spell was shattered in one day, when on October 24 a record one-day rainfall drenched the area: 5.44”, breaking their all time single-day rainfall record from 1880.

This Category 4 storm was the worst to strike Louisiana since the notorious Hurricane Katrina.  When Ida made landfall, a 172 mph wind gust was measured at Port Fourchon. Sustained winds of 150 mph tied this storm with 2020’s Hurricane Laura, and the damages from both left large swaths of Louisiana devastated.  Sadly, several of Ida’s fatalities were due to carbon monoxide poisoning from improper use of gasoline generators. 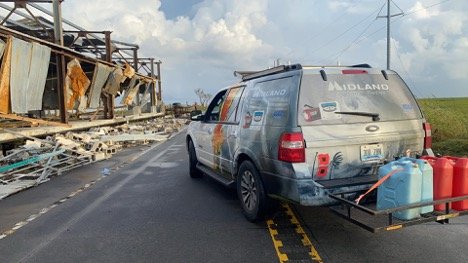 It was the largest and deadliest December tornado outbreak on record: eight states recorded 70 tornadoes. This included two violent EF-4 twisters, one of which was on the ground for three hours, with a continuous path of destruction for 165 miles, a record for the month of December. It was one of the longest tornado tracks in any month in US history. As it passed through Mayfield, KY radar detected debris being lofted 30,000 feet into the air.

A powerful low pressure system roared through the Great Plains on December 15, creating a dust storm, hurricane-force straight-line winds, and 99 tornadoes.  20 of those tornadoes occurred in Minnesota, which hadn’t seen a December twister since 1950. In Wisconsin, tornadoes were traveling over ground covered with snow.  The National Weather Service in Des Moines issued a Severe Thunderstorm Warning for a line of thunderstorms racing at 110 mph, certainly a ground speed record for a non-hurricane thunderstorm.

On December 30, winds gusting to 100 miles per hour roared off the Rocky Mountains and into the grasslands of the Colorado foothills, near Boulder. Following a spring of ample snow and rain, these grasses had grown high and thick, but the weather from July 1st to December 30th had been the driest on record. A fire started near the town of Marshall and quickly became unstoppable.  More than 1000 homes were destroyed in Superior and Louisville, making this the costliest wildfire in Colorado history. As our cities expand into the fire-prone grasslands of the “urban-wildland interface”, wildfire warnings will become more and more important for saving lives and protecting property.

The Hottest Christmas Day in US History 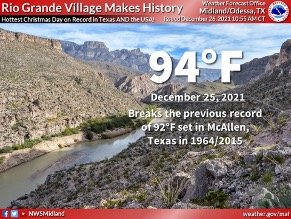 No doubt 2021 was a crazy weather year and there will be more just like it.  The United States is ideally located on the planet to receive some of the worst weather this world has to offer.  Storm seasons come and go, but we can experience dangerous weather any hour of any day of any month of the year.  That’s why it is important that you protect and prepare your family.  Have multiple, redundant methods of receiving life-saving warnings, including a NOAA Weather Radio.  Every home, school and business in America should have a WR-120 desktop radio constantly monitoring for trouble.  It’s peace of mind for just pennies a day…and your family is certainly worth it.