Midland Radio recently wrapped up its 16-week mobile tour, stopping at events across the entire country.

Midland's Tour Manager, Nick Bravo shared his experiences from on the road.

Midland traveled across the country for 16 weeks in our company Jeep, stopping at events every week.

“The Adventure Van Expos were located in some really cool areas. They were at some of the most beautiful locations I’ve ever seen in my life," Bravo said.

However, Bravo couldn't help but admire the Overland Expos.

“As far as the community, I really enjoyed Overland Expo East and West. Those are like the Super Bowl events for that group of people.” 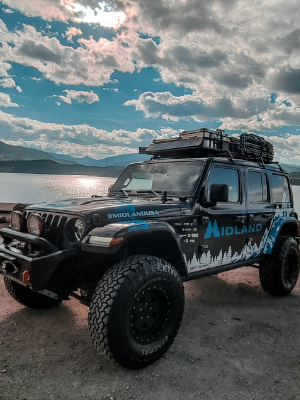 While on the tour, Midland connected with longtime customers and share knowledge with others looking to buy their first radios.

"You really see how Midland Radios can be used for just about anything," Bravo said.

For some, asking questions in person was necessary as they decided what radio would be the best fit for them.

"It's so important to have that face to face connection with customers. People were able to ask questions in person. It's so much more different than asking those questions over the phone or social media," Bravo added.

The events were also a great opportunity for customers to share their stories about how Midland Radio has impacted their lives.

"At one of our first events there was a gentleman that went out and his Jeep actually broke down in the middle of nowhere. He was nowhere near an active street and was about 15 miles away from the road. He used Midland radios to call someone to help him," Bravo said.

Tour-goers were especially impressed with the range Midland's two-way radios gave them whether they were using them for work or play.

“The biggest thing I heard from people was that they love the range. They love how they can get that range for such an affordable price. It’s such a great value and people noticed that," Bravo said.

He said a favorite amongst the crowds was Midland's MXT275 MicroMobile Two-Way Radio.

"People love the versatility of the product, the size of the radio unit, and the Fully Integrated Control Microphone. It saves people dashboard space when they’re able to hide away the base unit.” 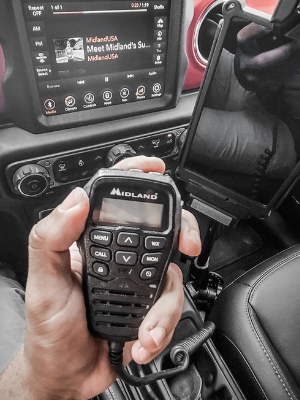 STORIES FROM THE TOUR

Bravo traveled from event to event in the Midland Jeep all summer long. For him, it was an experience unlike anything else.

“I’ve never had the opportunity to go cross country with my own Jeep so this was a blessing. First, I got to represent Midland which was just so exciting, but secondly, Midland has this awesome Jeep. To be able to drive all over the country through mountains and different terrains all over the country was a blast since I’m a huge off-roader myself," Bravo said.

The adventure that came from the tour is something Bravo will never forget.

"I love adventure. Midland is all about adventure so it was a natural fit. I was able to learn a lot about off-roading and how to be safe about it with Midland Radio. I’ll be able to utilize these skills when I’m off-roading and in remote locations," he added.

Bravo credited Midland for not only teaching others about the need for radios, but also him as he drove across the country, using two-way radios along the way.

“I never knew that a walkie talkie, something that I used growing up, could be used so many different ways, but most importantly, it can save your life. Radios are important safety items," he said.

Now, back home after the tour, he's taken his experience on the road and put it to use in his own vehicle.

“My favorite product is the MXT275. I’m currently in the process of installing it in my own Jeep. I’ve loved learning about it and hearing other peoples’ stories about how they use it in off-roading. I’m excited to use it because of all the amazing things I’ve heard from other people along the way," Bravo said.