Nestled in the Palo Duro Canyon in Texas, Merus Adventure™ Park is just over a year old.

The park is a destination for off-roaders, overlanders, mountain biking, hiking, backpacking, and camping.

There are over 6,500 usable acres of land for outdoor adventurers to take advantage of.

Throughout Merus, people will encounter sand, sandstone, red dirt, rock, stone, clay, and other environments, leading to an experience unlike other trails.

However, by the end of July, the park hopes to have 23 off-road trails with up to 50 miles, seven mountain bike/hiking trails that have 12 miles, five hiking trails of up to nine miles, one mini bike jump and pump park, and one off-road training park. 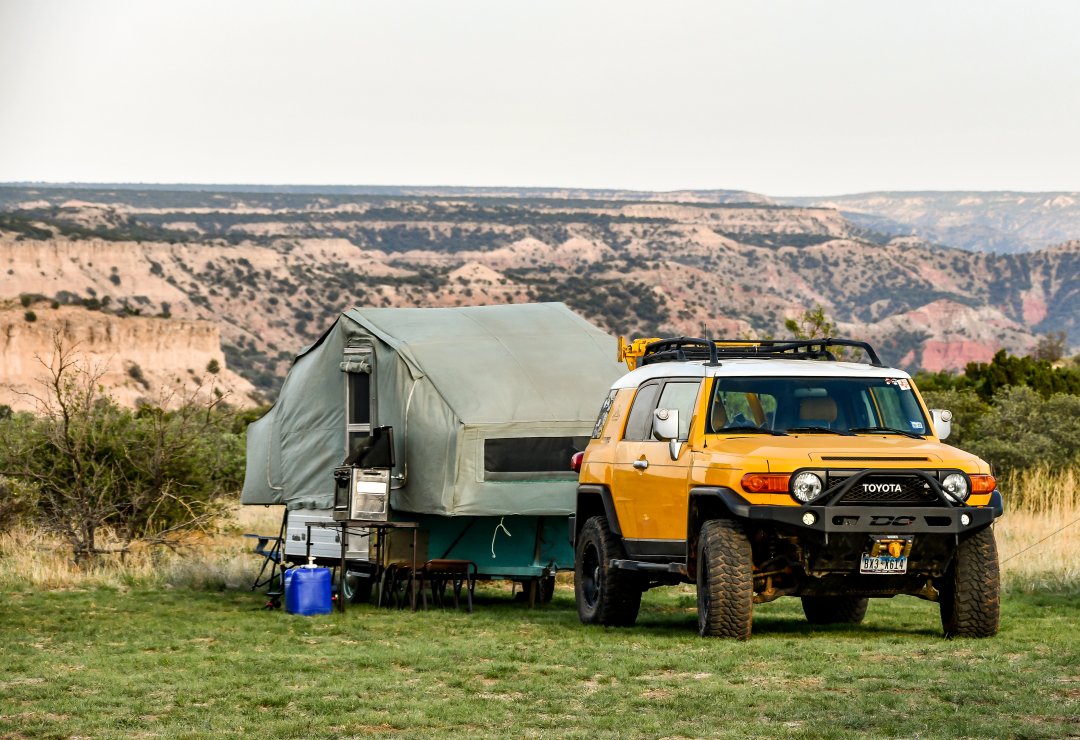 “Our idea behind this event is to provide something unique to the Toyota community. We wanted to give them access to the Palo Duro Canyon exclusively. We wanted to have something that made Toyota owners feel special and have their own thing," he said.

The event was Thursday through Sunday. All attendees camped at the park as Bronson was hoping to make building relationships a highlight of the event.

“We really encourage people to hang out and make a community. Merus is all about building a community so we wanted people to really get to know one another," he said.

The staff offered guided tours throughout the park, while others went off to explore on their own.

“We had quite a few people that were new to the park or new to off-roading completely so we broke it up into a brand new beginner tour and an intermediate tour. We took them on different levels of trails.”

It even reached 115 degrees in the canyon at one point during the event.

“Everyone just absolutely loved it. Our tour guides have a lot of experience out here. They’re really good at helping people be comfortable with their vehicles, learning some of the different things about off-roading, and really guiding them through the process. We really want them to learn and enjoy being out there.”

To offer another unique experience, the team took attendees out on a night ride.

“It followed the rim of the canyon. It has a lot of fantastic scenery. People got the opportunity to turn on their lights and use all the off-roading lights they have on their vehicles. We wanted to get them out there to experience wheeling in a different atmosphere.”

Bronson said the entire park was shut down for the event so attendees didn't deal with any traffic over the course of the weekend. He hopes the event continues to grow.

“We want next year to be bigger. We want people to have had such a good time that they keep coming back.”

However, he doesn't want the event to get too big and wants to keep it at a number that makes it personal.

“We just want to build on the excitement and momentum from this event.”

GMRS RADIOS ON THE TRAILS

“Our park is so big and there is a canyon with so many dips, valleys, and peninsulas that block radio signal. Traditional CBs don’t reach far enough for people to communicate with staff. Now, we require GMRS so people are able to get ahold of us and we can communicate with our tour guides.”

The team even set up a repeater inside the park.

“This way we can have crystal clear communication all throughout the park.”

“It was a phenomenal experience. We had a ton of radios for staff to use. They worked so efficiently throughout the entire event.”

Communication, specifically GMRS radios, was a focus for Bronson ahead of time.

“For an event like this, having crystal clear communication is probably one of the top, if not the most important things to think about. The staff has to have a way to communicate without cellphone signal, we have to know where people are at along the trails if there was an emergency.”

Bronson said there is no cellphone service at the park so communication between staff is particularly important.

“We have some of the Midland GMRS MicroMobiles so we were able to show them how it could work in their vehicle, how it has more power, and some of the features. We explained to them what they should look for in a radio and determine which works best for them.”

“I love seeing people get out of their comfort zone and have an amazing reaction to new experiences.

Midland Radio has continued to work with Merus Adventure™ Park as a sponsor of the park, offering members exclusive discounts for GMRS radios.

A car enthusiast group brought Midland's two-way radios along for the ride as they drove through remote locations in the state of New York. Learn more about how two-way radios helped keep the drivers in lockstep.
Continue Reading