According to the U.S. Department of Agriculture, more and more women are getting involved in farming.

The Census of Agriculture noted that nearly one million women are working on land in America. That is about a third of the country's farmers.

Together, women are generating about $12.9 billion in annual agricultural sales.

Rebecca works on a dairy farm where she has her own herd of cows.

Hilby also lives on a farm with her husband and three children in Hazel Green, Wisconsin. It's her husband's grandparents' farm. There, they raise bottle calves, steers, corn, soybeans, and enough hay for all their animals.

Hilby didn't grow up on a farm, but was part of 4H.

One day at a meeting a farmer asked if they wanted to show cows.

"We just said yes. It was the beginning of everything for me," Hilby said.

After that, she went on to study dairy science. Upon graduating, Hilby got a job at a dairy farm. She still works there full-time.

WHY FARMING IS SPECIAL TO HER

Hilby is passionate about what she does. She enjoys farming because no two days are the same.

“I love just getting to work with the land and the animals. Everyday is a little different. You have a routine everyday, but it’s still different because you never know what cow is going to get out or whatnot.”

Getting to work outside is a plus.

“You can enjoy the weather even if it’s not nice out. I just love being out there," she said.

Working and running the farm at home gives Hilby and her family the ability to create lasting memories together.

“Being able to be around family is a big plus. We usually have our kids out with us. We have a four-year-old, two-year-old, and a newborn. Being able to farm with them by our side is really special.”

She says the farm is an opportunity for the family to spend quality time together while sharing unique experiences.

“Whether they’re on the tractor with dad or feeding calves with me, it’s really nice to be able to raise them that way.”

The USDA's Milk Production Report showed that annual milk production in the United States in 2020 was 223 billion pounds. That was an increase of just over 2% from the 218 billion pounds produced in 2019.

In early 2020, the dairy price environment was favorable despite the pandemic. However, the rising price of feed that occurred in late 2020 is likely to carry through 2021.

While the total milk cow inventory at the end of 2020 was the highest since 1995, experts predict expansion will halt this year. This could result in a decline in cow inventory.

“Those cows get milked twice a day, sometimes three times a day depending on the farm. The calves are getting fed. Cows love routine so you can’t really mess with that. It’s very labor intensive.”

She said the safety and quality measures for milk are unmatched.

“On the safety and quality side, products before they get to the grocery store, are tested before it leaves the farm for antibiotics or any residue in it and tested a few more times after that to make sure it is held up to these high standards.”

Hilby said there are misconceptions about the dairy industry within the United States.

“People should just know there are no antibiotics in milk. We work really hard to make sure that the girls are really happy and healthy.”

While working at dairy farms is labor intensive, Hilby said the cows make it all worth it. Being around them is part of why she loves what she does. 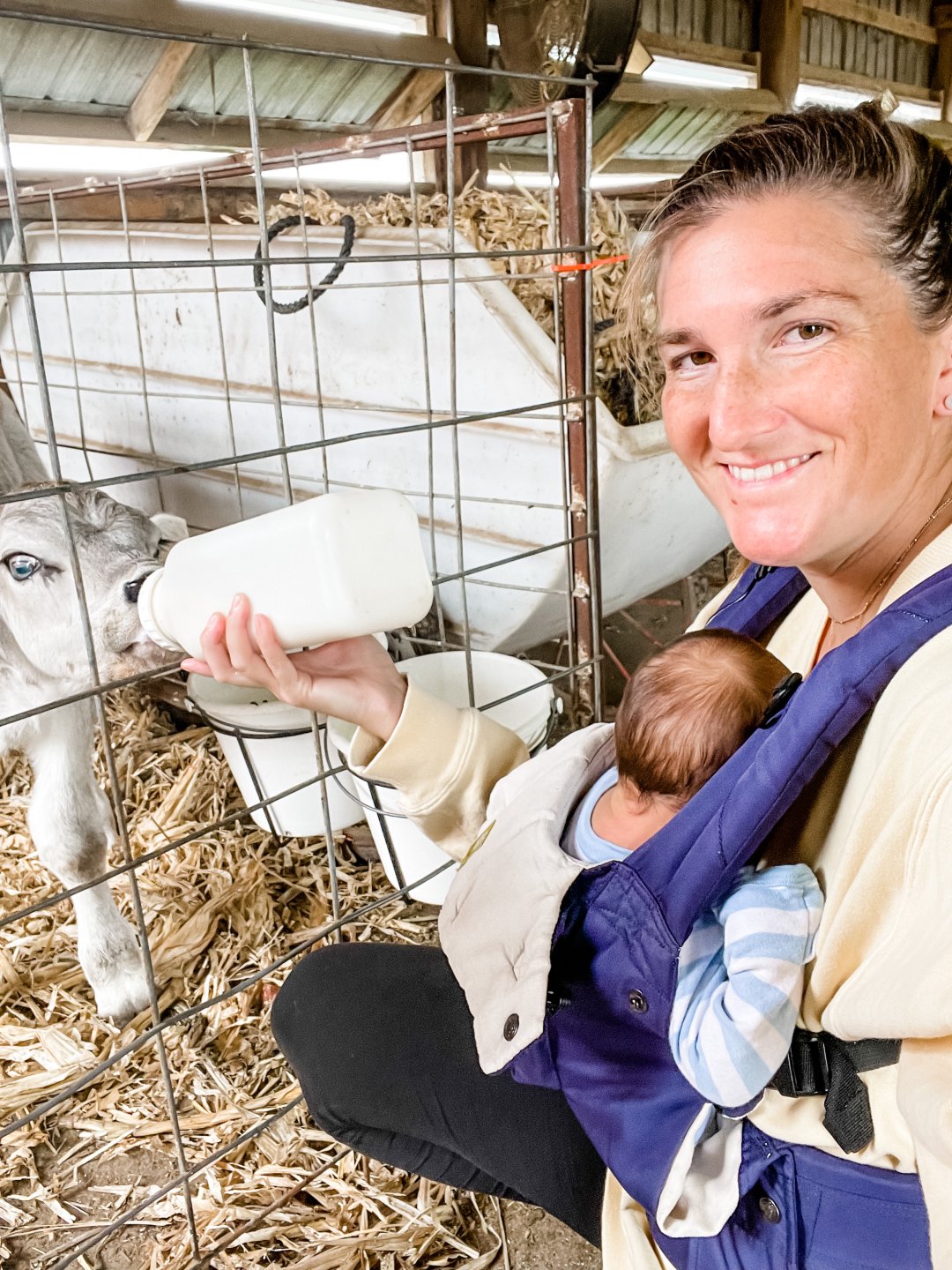 While the number of women in agriculture continues to grow across the United States, Hilby said she hasn't faced any discrimination in her field.

“I haven’t really ever had someone tell me I couldn’t do something because I’m a female. I’ve been really blessed to be surrounded by really great mentors and people that encourage me to do my best.”

That doesn't mean every woman has the same experience. Hilby is aware that some people aren't as welcoming to women in AG as others.

“I still hear in other areas of people going to a farm and asking for the farmer. They have to say, ‘I’m right here. I’m the farmer.’ They just want to speak to a man. I know that’s still an issue in some places for some women.”

She counts herself as one of the lucky ones with a community that treats her just like any other farmer.

“Luckily, where we live, you don’t see or hear too much of that.”

However, she has faced obstacles being a woman in farming. A new mother, she said working while pregnant wasn't always easy.

“Pregnancy is hard being a female farmer. There’s a lot of stuff you shouldn’t do while pregnant like not lifting as much and not pulling calves. You just have to ask for help a lot more, but I work with great people who are willing to help.”

Hilby said the increase of females in agriculture excites her.

"It's changing and it's improving. That's so wonderful to see."

She hopes that growth continues and inspires the next generation of female farmers.

“When you see someone else doing something that you think you want to do, they’re succeeding at it, it gives you that extra confidence boost that you can do it. It makes it a little bit easier to put your mind to it.”

The dairy farm she works at is close to a college and Hilby said often times high school students come out and help. Many of the employees at this farm are female.

"I love being surrounded by all the girl power."

For those young girls and women looking to get into agriculture, Hilby hopes they know those that came before them are ready to help. She said surrounding yourself with those women who empower you is key.

“I would tell them to seek out a mentor- someone they could either work for or if they aren’t really around many farms, someone on social media they can go to for advice. It’s easy to feel alone, especially in rural communities. Also, seek out friends with similar interests farming-wise.” 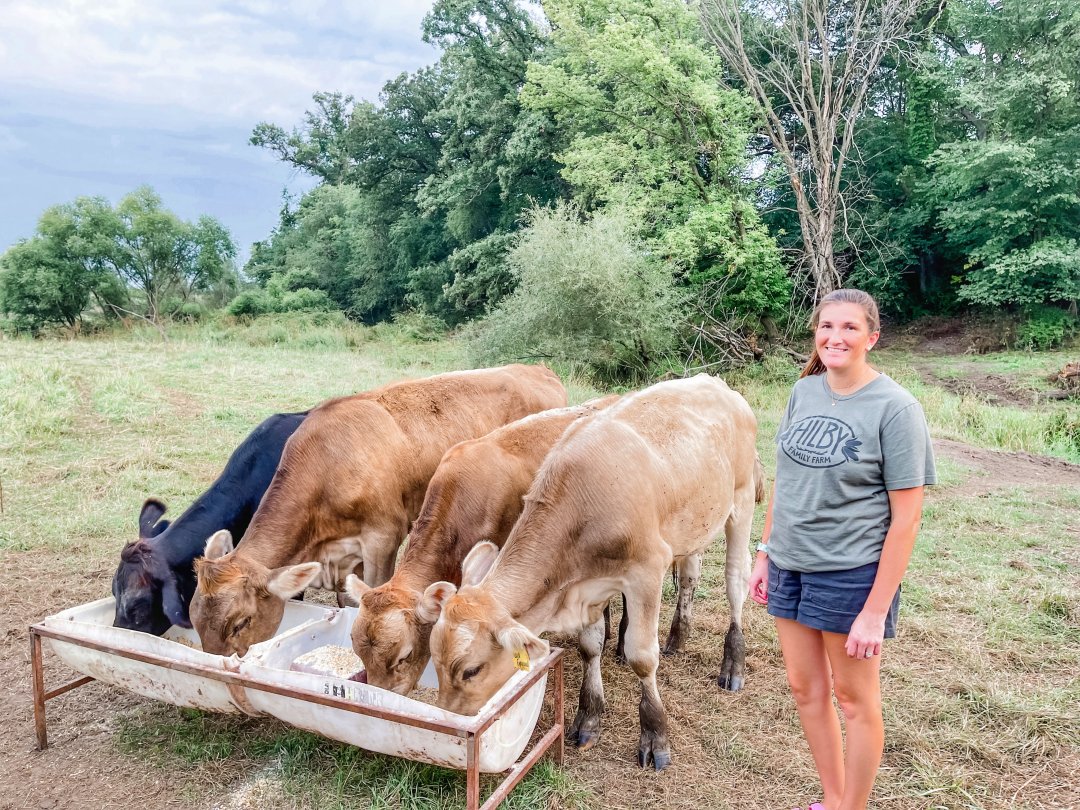 USING TWO-WAY RADIOS ON THE FARM

Hilby and her family know just how important reliable communication is to getting the job done on the farm.

“In certain areas on the farm the cell service isn’t great, but we can always, always rely on radios to get us through.”

"If Joey is out in the field and I’m in the barn, it’s an easy way to communicate. If he needs something he can just radio me rather than calling me.”

While their kids are young, their oldest already knows how to use the walkie talkies, giving her and her husband peace of mind.

"It's really nice because she can stay in the house if she wants to and just know that we’re just a radio away if she needs something.”

The Hilbys chose Midland's two-way radios because they're reliable.

“The quality is top-notch. Everything that we’ve used we’ve had great luck with. There are so many options of different radios to choose from too," she said.

They use Midland's MXT115 MicroMobile Two-Way Radios in their tractors, skid loaders, and 5x5. The family uses Midland's T71VP3 handheld two-way radios elsewhere on the farm.

The MicroMobiles are her favorite product.

“I really like the range on the MicroMobiles installed in the skid loader and tractor. The quality of the sound that comes through them is incredible. We can talk back and forth and they come through clear.”

The two-way radios have been a big difference throughout harvest season in the fall. It's their busiest time of year.

"It's all hands on deck to get the job done. Communication is part of that."

September marks National Preparedness Month. Talking to your kids is a crucial step as kids often experience fear over storms. Midland Radio shares its tips on speaking to kids about storms and how to prepare them.
Continue Reading