We caught up with their Vice President of Field Operations, Ryan Harriott.

Indiana Storm Chasers was founded in 2019. It consists of a core group of about 15 chasers.

"Our mission is to keep Indianans and Hoosiers safe from severe weather, prepared and educated. We want to help people out as much as possible," Harriott said.

On the day of the storm the group makes forecast graphics to share to its Facebook page. Depending on the awareness surrounding the storm, that post may reach anywhere from 10,000 to 200,000 people.

“They’ll go out and get video, photos, damage reports, etc. We report those to the National Weather Service and to ourselves and post those photos in real time. This is so that people not only see a warning, but they’ll see what the storm is doing in real time," Harriott said.

Within the next year, the plan is to implement livestreams while chasing.

"We want people to see what these storms are actively doing."

"I've seen the power of these storms and the damage they can cause. We've all seen it and that's why when we are able to, we want to be able to help people in the aftermath." 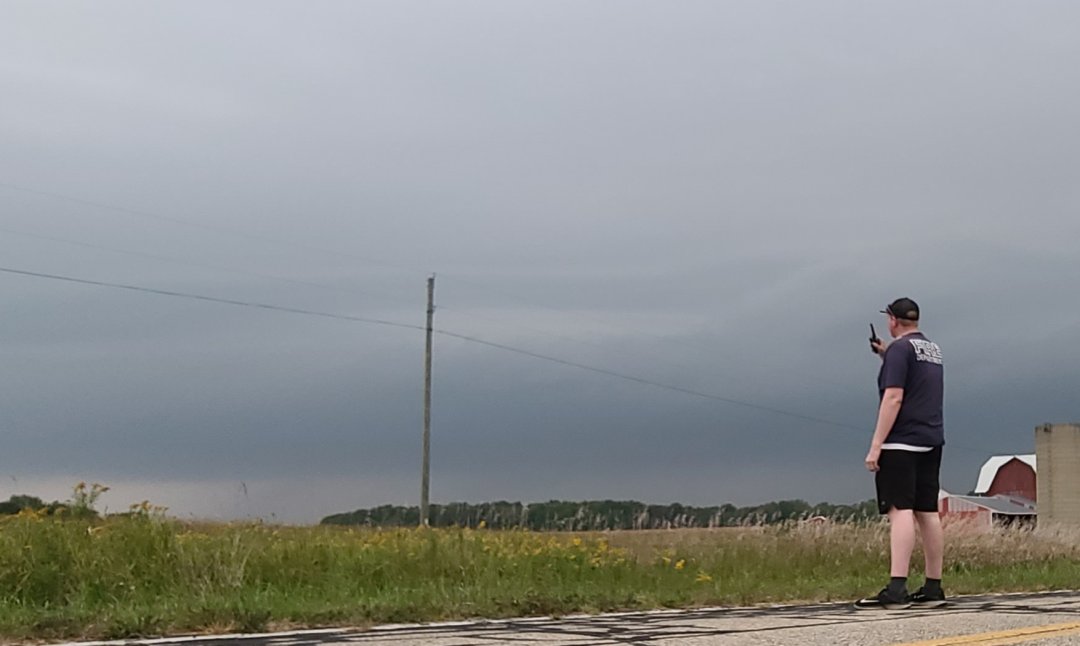 Harriott says the main goal of Indiana Storm Chasers is to keep the people of Indiana safe when severe weather hits.

He hopes real-time photos and videos help people understand the severity of storms.

"It’s not just seeing a warning box, but it’s seeing an actual tornado or tree snapped in half. It’s something that shows people, ‘Hey it is doing damage, maybe we should take shelter.”

Harriott said safety is the group's number one priority. That includes the safety of the chasers.

"We have a strict driving policy because that's number one. If you're out by a storm, the more you can do to be safe, the better," he said.

When out chasing, the location of the driver is shared with everyone in case of an emergency.

“When our chasers are out chasing, we have locations on them at all times in case something were to happen. “

At the root of all safety plans for the organization is communication.

“Storms are dangerous, lightening can strike vehicles, when we’re out chasing we are communicating," Harriott said.

“Weather and storms are unpredictable. You have no idea what’s going to happen. It’s good to have some form of reliable communication in case something does happen to you or something around you happens.”

Before Midland Radio's walkie talkies, the chasers relied on cellphones.

“We had been using a walkie talkie app on our phones, but you can hit dead zones. Also, if you lose service you lose the app.”

"The walkie talkies are great. They've made communication easier and more reliable. That ease of communication means safety for our chasers."

Using radios has made their chasing more efficient than ever.

"We can just lean on reliable communication and not worry about that when we're out there doing our job."

The team has enjoyed using both the handheld two-way radios and the MicroMobiles together to get the job done.

"When we're doing damage surveys...I had my hand held on me. Alex, one of the other chasers, he used the MXT115 in the car while I cleared debris out of the road."

The reliable communication has added another layer of safety to what can be a dangerous job.

"The communication we used in the past relied on network connection so when we lost that, we lost communication. That alone makes our job ten times harder and more dangerous. Now that we have this reliable communication things run smoother and are safer."

A LOVE FOR WEATHER

Harriott has always been interested in weather, but seeing storms up close and personal is unlike anything else.

“When you’re chasing a storm you’re just taking in the beauty of it. It’s the unknown of what you’re going to see and what you’re not going to see. When it’s a tornado, it’s an adrenaline rush.”

However, storm chasing means witnessing the destruction storms can leave behind.

“It’s humbling to see the damage and the power that these storms have. It gives me the drive to help others.”

Harriott knows there is still more to learn.

"There is still a lot for me to learn about storms and weather. It can be so unpredictable and the more I'm out in storms, the more I'm learning."

He traveled down to the Huntington, IN area where the initial line of storms didn't produce any severe weather. However, around 7 or 8 p.m. that changed with the secondary line.

Harriott turned around, went north, and then cut east.

"I was able to get ahead of it, but looked to my left and there was a massive wall cloud that was rotating. It ended up producing three tornadoes. They weren’t that big, but they were cone-shaped. They lifted. A few minutes later another tornado. That picked up for about 30 seconds. It just kept spinning off tornadoes, probably eight or nine just from one parent storm.”